As a LUNA supporter pre attack and a LUNA supporter POST attack - I am responsible for sharing these tweets with my community members, friends and family - and encouraged them to buy the dip and load more capital towards LUNA.

I had to apologize to all of them and admit that I was wrong for trusting DK - I was lead on by somebody that called us “Family” and ensured that a plan of action was in place.

Why is it so hard to acknowledge the ones that DCA’d down? Why is it considered suddenly uncommon of a supporter of a project to DCA and being perceived as a “Move for profit” - when in reality, any major supporter of ANY project often DCA’s on the way down - not only to mitigate loss of your initial position - but to show your support for a project you believe in.

Moving into the new fork or whatever you’d like to call it - you bet your ass that I’ll be now looking to “profit” - rather than “support” - and I know many others will too - I feel that I was lead on by DO’s tweets and because of it, I not only let down my peers by sharing them - but also burned a lot of people I care about.

The saddest part is that none of us who bought on the 8th, 9th and 10th will receive even a fraction of what we paid - I put almost 45k USD from $30 downward.

The least they could do is apologize to us specifically if you’re not going to fairly compensate us.

I know I’m not alone here.

There should be some responsibility for the misleading public remarks made by do kwon. 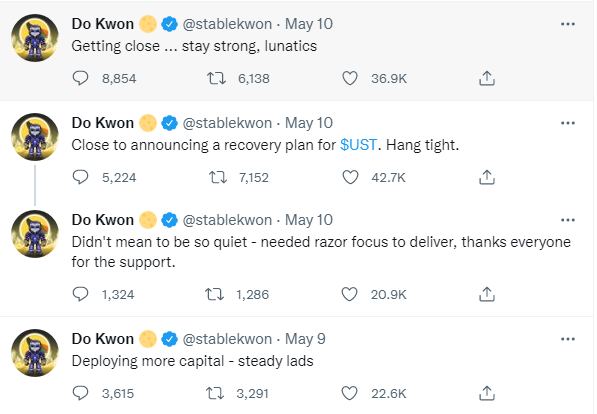 Very sorry for your loss. There might be some consolation in the fact that we are countless and also that I can’t imagine he is going to have to give some answers sooner or later. On the upside, if he and team make it passed that enabling Terra 2.0 then there is a chance a lot of us will at least break even. A dim light at the end of this slimy tunnel.

I am in the same boat. Do should be held responsible for misleading the community into throwing money into his worthless coin when he knew it was about to become 0.

If you remember the COMP incident, the team immediately warned people NOT to buy it. This is what a great team does.

Do is definitely showing fraudulent behavior.