Phenomenal project idea and outline here. Excited to follow TerraKado as they provide a much needed boost to our community. As long as it appears the team are keeping the community up to date as this progresses I have absolute confidence in the project. Will certainly be voting for this!

Thanks for answering those questions. A few more if you dont mind - I think these are important and are being posed by various community members on online fora.

Hi @effa thank you for the further questions -

We do not want to come off as giving legal advice to you or your decision in this process however we are filing as a Delaware C-Corp.

We’ll maintain a strict Token Transparency log (similar to this) that will keep our expenditures in order - we’ll need this for our own bookkeeping. Our wallet with these funds will be available/open, and on-chain in the wallet for all to see - “The Terra Kado Wallet”. We have some advisors rolling out in a few days and will be sure to include them in this process. And no, no loans or bLUNA for these efforts.

The recent developments with a Coinbase card, Gemini card (also on MasterCard), are great to see. It gives us the confidence we’re moving in the right direction. We do not have any active/beneficial comment re: ApplePay and our efforts right now, but MasterCard’s network is fully capable on ApplePay, so it seems like a natural progression.

We see it as an opportunity to get our teeth sunk into the Terra community, as the roadmap for a Gift Card swap is much more attainable at present. Check out eco.com and foldapp.com further - Virtual/Physical Debit Cards + Gift Cards, with savings/discount features. These are good comparisons for the shorter term.

@morycrypto Thank you for your follow ups. They don’t go unnoticed. The post that started it all was a heart worn on the sleeve. Sure it was embarrasing but it was open and forthcoming. It may have been irresponsible, getting one in such a position but being open about it was the kind of openness we need in our community. It shows you’re human, just like the rest of us.

At first when I commented on the new announcement it was moreso in jest, the tone communicated by the Justin Timberlake meme. However I have a tendancy to refer back to things to confirm beyond reasonable doubts and it was to my shock that the tweets were gone. What struck me was the one deleted Tweet that spelled out transparency. It struck a cord.

And of course that cord was struck again when I came back to find my new Tweets were “hidden by the Tweet author.”

But again, I appreciate you stepping back out and in front of all this. Albeit with a push, I think it was needed for you to do so and regardless if you were liquidated or not, regardless of how irresponsible it’s perceived by some to have taken such gambles, I thought it was brave to announce your situation. It’s not so much the same as companies announcing data breaches; after all, those are data breaches. I wasn’t sure if this was TK’s funds or the poster’s funds in jeopardy, and I felt some clarity was needed.

Now, I did not Tweet for you to “delete this” as others had. Those responses I felt were insensitive and trollish, regardless how much of a point they might’ve had. Again I thought it was brave and the right thing to do to announce whatever mistakes you make. That kind of communication with the public is what I believe strengthens public relations. I shared the Tweet across the Discord servers, as I was asked for your wallet address when I made my discovery known. I’m sure many of us were all too busy or concerned with our own assets dropping in value, but I’ve been tuning in to all things Lunatic. Yeah, some people in the Discord shared that insensitive tone, whereas others I believe felt otherwise.

I was under the impression you did get liquidated, and you had put out a follow-up post dusting off the proverbial shoulders, to which I Tweeted in response: “keep on rockin.” I don’t “Tweet & Delete” – I kind of just learned about that starting in February, but I’m a solid fan of transparency and honesty. Communication is the skeleton key to the doors of both Success & Failure.

I didn’t expect my findings to gain such traction; the Tweet-hiding reminded me to the drop in the bucket that I am among the many audience members, but I must appreciate that it brought about the right thing to do. I accept your apology and I maintain: keep on rockin’.

But to that end and Tweets aside, I guess I can move on to the Q&A.
Now that the doxing has begun, I see you guys are stationed in New York and I see KYC mentioned.

Will Terra Kado be required to file for and obtain New York’s Bitlicense?
I ask because understand this to be rather crippling to crypto startups.

What of the other licenses from state-to-state in the USA?
I found these under Nexo’s Licenses and Registrations (for consideration):

Communication is the skeleton key to the doors of both Success & Failure.

Could not have said it better myself - keep on rockin’ to you too, ser. FWIW I still do not see the replies as hidden that you see, so that is a bit odd to me. As a community-focused project, we want to be as open and transparent as possible and I appreciate your help in doing that.

Will Terra Kado be required to file for and obtain New York’s Bitlicense ?
I ask because understand this to be rather crippling to crypto startups.

Great to see your legwork in reviewing Nexo - I really appreciate those insights. As you can tell, Nexo is a lending protocol and has issued its own cryptocurrency / digital asset. They have all these lending licenses likely due to their specific use case and are rather different than us, specifically:

Simply - we are a middleman enabling PrimeTrust services to you (who do all of the above). PrimeTrust has charters, licenses, crucial KYC/AML functionality that enable them to do all of this (hence the fees involved). All of that is not to discount us going through with licensing and banking on our own down the road - the most immediate would be to the Office of the State Bank Commissioner in Delaware (where we’re incorporating), but in the short term this is not an immediate concern. Take a peek at alice.co footer copyright to get some more context around this.

Thanks for the good question. Feel free to join us in Telegram over here.

i couldn’t agree with this more – about those who use these trite sayings – how fucking cringe is this? came in here to investigate Kado and this is what I find? What damn embarrassment and waste of my time.

Interesting read and despite the shenanigans and some of the trust issues that have emerged, the concept with terra kado and its partnership with Prime Trust is interesting.

Is it possible for some sort of letter of intent from Prime Trust to be produced to clarify the relationships involved?

seems like Kado can add value, but kinda feel uncofmortable seeing some of the content on this thread

Is it possible for some sort of letter of intent from Prime Trust to be produced to clarify the relationships involved?

Working to produce an LOI for PrimeTrust and Terra Kado now - will update this message when finalized.

seems like Kado can add value, but kinda feel uncofmortable seeing some of the content on this thread

We will provide further condolences on the matter of community trust - but do know that it is genuinely one of the most important to us. We continue to have calls with builders and mentors in the space and will look to further remedy this before any governance proposal is submitted.

Terra Kado is not built with profits, income, or salaries foremost in mind - we are doing this out of necessity and desirability to make UST as composable as KRW/KRT is in South Korea.

Participated in the Delphi DeFi Hackathon, where we found others’ desire for these solutions and affirmation that we’re onto something. We received runner up in the contest.

Am I looking in the right place? Runner-up seems to have been ApolloDao. 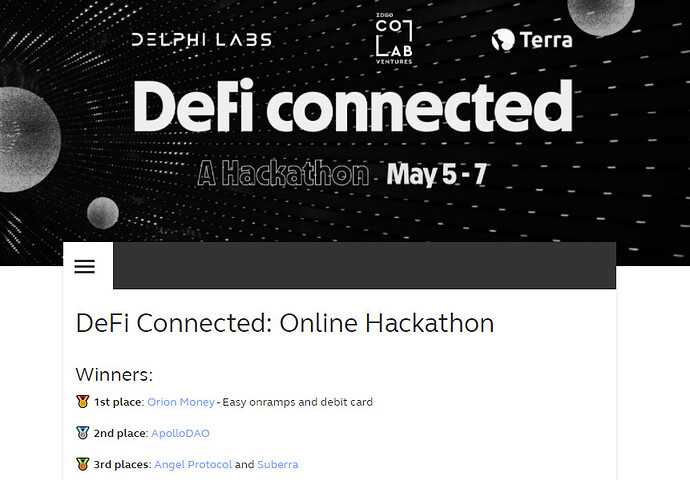 Apologies for the confusing wording - we meant we received no award in the Delphi/IDEO hackathon, but were mentioned as a runner-up. Will clarify in our v2/updated proposal

@lukedelphi
Special shout out to TerraKado (@terrakadopay) who are a solid team focusing on making UST useful to spend in the real world, which is a fairly important utility of money and something that absolutely needs to exist on Terra.
flipside June 10, 2021, 4:52am #37

Apologies for the confusing wording - we meant we received no award in the Delphi/IDEO hackathon, but were mentioned as a runner-up. Will clarify in our v2/updated proposal

Community funds shouldn’t be given out for personal projects.

Ok I stand corrected. Thanks to Hoskinson https://youtu.be/Ja9D0kpksxw?t=37m13s

Just transparency would be nice.

What will the fees for users look like: i.e. i want to move 10000 usd from a my US NY bank account via ACH to UST?

We are not going to vote Yes for 3’rd parties that have the intention to tap into the community fund, yet. We consider that, currently, the market is overwhelmed with pseudo businesses that promise a lot and deliver low or nothing. The other case is for solutions that are promised without proper market evaluation, based on the dreams of some developers. I do not argue if the solutions are good or not, legit or fraudulent. We will maintain this position until further notice.