Hey @n3mo - this is a massive proposal, excited to jump in.

As partners of the Terra ecosystem and Anchor it is undeniable the benefit this may add to the protocol.

However, I believe a bit more clarity is important and comments above bring up strong points.

The second question is most important in my opinion. Excited to learn more!

We’ve thought of this a lot too, and TFL could easily have funded this out of pocket.

Also, keep in mind LFG was just capitalized by TFL a few weeks ago.

Decentralization…what a dream.
So basically the $450mln comes from dumping some LUNA of LFG?

When Anchor was recapitalised last year, it was estimated that the funds would last a year, and now they’re nearly gone. In the meantime, the only development is that bEth was added as a collateral asset, despite IBC being supported for months, which I understood was the last major milestone before more bAssets could be rapidly onboarded.

Additionally, when the reserve was last topped up, there was a large inflow of UST into Anchor which made it even more unsustainable because of the large safety net. I suspect that adding another $450m would do the same and whatever growth predictions won’t matter. Yes, it will be good for UST’s and Luna’s market cap in the short term, and obviously make attention-grabbing headlines, but this is not sustainable in the long run. It’s easier to fix the problem while it’s small, not when there’s many billions of potential outflow from Anchor due to the reserve running out in another few months’ time.

I propose that funds be disbursed based on milestones, in terms of new bAssets being supported.

Do not let Anchor recapitalisations become Terra’s version of Ethereum’s ETH 2.0 difficulty bomb. Just like the difficulty bomb is delayed every time it gets near, Anchor should not just have money added every time there is a bear market causing large drops in collateral. Let this new recapitalisation be a carrot for the rapid development of Anchor, not a golden bandaid.

I would also like to note that I wrote similar thoughts the last time Anchor had a crisis.

Is there a way for the YR to not sit idle earning nothing? Can it be paired with another stable coin and LP’d? It would be good if the YR itself was appreciating. Maybe part of the YR doesn’t have to be a stable coin. The first replenishment of $70m if in part was kept in LUNA, would have provided a longer runway.

I will support this with a small amendment!

We should allocate some funds to hire more developers for Anchor protocol and speed up de development. Also, some funds should be deployed for content creation to promote Anchor 20% via Coinmarketcap, CoinGecko and top crypto websites traffic to onboard new people into Terra ecosystem. We need more awareness around Anchor as well!

Maybe replenish AYR using your own mechanism:
LUNA > bLUNA > borrowed UST, then slowly repay LFG when use cases will provide a healthy/regrown AYR.

There’s also the potential for the billions of UST sat idle on deposit to be productive and deliver a yield back to the protocol.

The main issue will be gathering consensus on how to safely deploy it.

Thanks, Do Kwon. Maybe future substantial funding initiatives could consider DCA Luna into UST if it makes sense.

the 19.5% was never sustainable, even less with the bigger picture where you onboard non defi and more traditional users on platforms such as Alice etc where you have deposits but not enough loans.

But of course, this is for Anchor to decide, but looks like the team still believes they can make it sustainable with more bassets, which I doubt.

If only they didn’t had TFL on their back supporting their lack of execution, I believe they would have realized this a long time ago.

Hello haven’t you said you were going to inject 300m on twitter?

+1 | strong support on the marketing and content creation side

I am more or less a crypto newbie but an advocate of smart ideas. And I’ve stumbled over Anchor via a wom rec from a friend.

Crypto bubble needs to put their heads out of crypto bubble to “onboard the next 100 Mio users”.

In reference to this research by Pedro Ojeda https://twitter.com/pedroexplore1

@pedroexplore1
Anchor Protocol bLuna Collateral: 50% of the total $3.3B Luna collateral belongs to 4 borrowers, all private wallets. There are 25,500 borrowers, but 25,100 of them account for only 18% of the total collateral. The largest smart contract is Nexus in 17th place with 0.63%. 1/2

"Anchor Protocol bLuna Collateral: 50% of the total $3.3B Luna collateral belongs to 4 borrowers, all private wallets. There are 25,500 borrowers, but 25,100 of them account for only 18% of the total collateral. The largest smart contract is Nexus in 17th place with 0.63%. 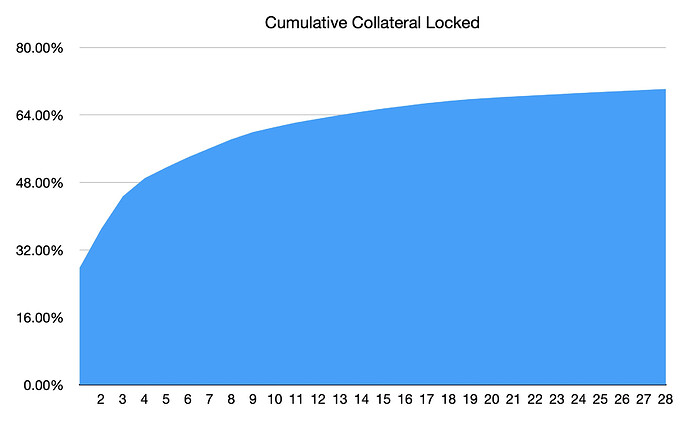 Does TFL know who owns these top wallets? I ask because the wallets are not behaving rationally.

How many billionaires do you know that pay such high interest on their money? Wouldn’t a billionaire run a bot to maintain a high LTV so any unused bLUNA was sitting in their wallet gaining yield? By running a 40% LTV they would get an extra 10.2M per year in staking yield. With that kind of money you could hire a team of people to manage your loan manually. But they choose not to. Why?

If these top wallets are irrational or generous anonymous investors who wish to subsidize the yield reserve then we have HUGE concentration risk. If they decided to pull their bLUNA then the yield reserve is in trouble.

If these top wallets are Do / TFL then the reality of the subsidy going to Anchor is much bigger that just this 450M top-up. Perhaps as a marketing cost, this is justified. Perhaps this is how you bootstrap a trillion-dollar company. Fine.

We really need to know either way though. Are these wallets anon and could exit at any time or are they known and controlled?

thanks for this. great write up, super rational assumptions.

my 2cs would be for a DCA approach as i believe,

To best compete against other stablecoins, whatever
decision u’ll take pls do not loose this magnetic promise/brand: “19,5%”.

I think @farmerdbrown 's point is an extremely good one. We want to be able to discourage bad actors who will just be able to take advantage of what is essentially a massive subsidy. I like the idea of a maximum deposit amount for non-whitelisted wallets or tieing the purchase of ANC to the amount of yield you can generate. How do we stop some levered monster from depleting the reserves?

100% agree. I don’t understand why nobody is commenting on the issue of high and not sustainable borrowing rate.

Adding bATOM or sAVAX will not do anything as I can borrow on BENQI against AVAX at 1-3-5% instead of 35%.

Hope team will thing about creative way to decrease a borrow rate, the only way to make Anchor sustainable. I loved 19.5% but it’s time to decrease it down to more sustainable 10% and subsidy effective borrow rate to get closer to 5-7%