Demanding Evidence Of an "Attack"

The Entire narrative of the so called Revival Plan and distribution of Assets has been based on the illusion that there has been an “Attack” that led to UST depeg event.

If indeed there was an attack then we need to be shown hard evidence of such an attack actually taking place and not just empty words.

FYI, I have seen several detailed analysis by independent analysts and none points to an “attack” but rather an insolvent Stablecoin with low investor confidence leading to eventual bank run.

Therefore, any distribution of assets on the basis of an “attack”, an attack that’s unproven and most probably did not happen is an act of fraud in itself until proven otherwise by hard evidence.

There was no attack. The repegging simply did not work. See reasoning here. Even if LFG had $10B the depeg would not have been saved for a simple reason.

YOU all missed letter from Nakamoto Family, I was trying to re-post this as fast I could, then short after moderators erased thread, look at my profile my posts&conversation, dates, and my screen shot here
YOU ALL MISSED opportunity to find out why, it was explained all
I COULD NOT BELIVE NO ONE RED THIS LETTER
they said the would be one off communication from ‘them’ and was signed by
Mr. Nakamoto Jr.
search my profile and history, go ahead 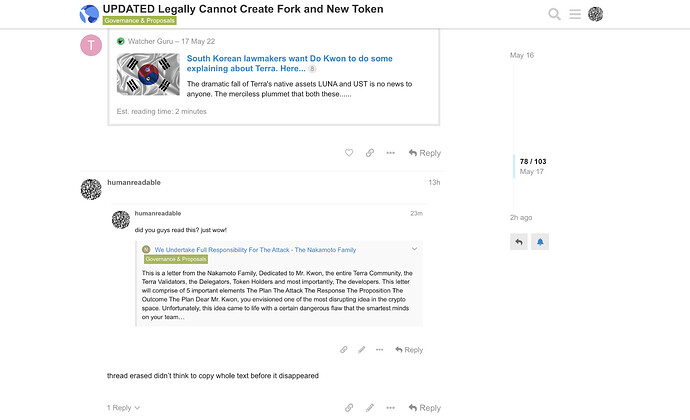 The attack narrative is to give them some legimacy to fork and compensate pre attack owners, don’t take it too seriously.

They attacked themselves to cashout and create the 3rd p0nzi

Yeah, agree. COULD have been an attack, could have been a big swap happened minutes after liquidity removed simply by someone who wasn’t expecting millions of liquidity from minutes before to suddenly be gone

The attack narrative started on crypto twitter, it is organized well on this thread by Onchain wizard. However there are some assumptions such as who borrowed the 100K BTC? And the borrower is the same entity as who removed the liquidity from the 3curve pool. Until we can make connections I agree too that it lacks evidence to say that it is an attack. Also, for TFL and some of the most hardcore influencers who were virtually giving out ‘financial advice’, it does a lot of face saving and even creates the ‘DeFi vsTradFi’ narrative.

@OnChainWizard
How to make a >800 million dollars in crypto attacking the once 3rd largest stablecoin, Soros style: Everyone is talking about the $UST attack right now, including Janet Yellen. But no one is talking about how much money the attacker made (or how brilliant it was). Lets dig in🧵

1/ Introducing the 4pool - between @fraxfinance, TFL and @redactedcartel we pretty much own all the cvx UST-FRAX-USDC-USDT Curve wars are over, all emissions are going to the 4pool https://twitter.com/ItsAlwaysZonny/status/1510011598492123143 …