LUNA tokens pre-/post- attack both should be accepted in the governance vote.

I understand the frustration and confusion of pre-attack holders of LUNA. However, you need to remember that pre-attack holders were the ones who voted to mint massive amounts of LUNA to the open market- giving the post-attack holders the chance to be part of LUNA governance proposals (no matter what their motive was; saving LUNA / reaping profit in the chaos)

The purpose of LUNA token is for governance voting. Nothing else.

Hence, I don’t see why the validators and TFL have any right to revoke the essence and purpose of these coins.

There is no precedent to this issue in the crypto industry but it raises 2 questions. “What is LUNA token, if not used for governance?”, “Is it legal for the TFL and validators to invalidate the post-attack holders?”.

When the LUNA holders present this to the courts(multinational lawsuit), TFL and the validators are obviously liable for the loss of monetary value of the coin/share of pre- and post-attack holders (especially so because they allowed the trade to happen. and CEXs are not bystanders in this area. they will also be part in the lawsuit).

Hence, forking without everyone’s input will eventually destroy the newly issued token (Terra v2, as people call it) due to the massive legal issue that it will face.

Pre- and Post- holders should not fight with each other. Rather, both should realize that the issue is not us vs them. It’s holders vs TFL, Validators and their enablers.

*There are groups already formed and discussing how to proceed with this lawsuit.

They should burn at 3% each transaction. Fork only helps developers not people

Hence, forking without everyone’s input will eventually destroy the newly issued token (Terra v2, as people call it) due to the massive legal issue that it will face.

Pre- and Post- holders should not fight with each other. Rather, both should realize that the issue is not us vs them. It’s holders vs TFL, Validators and their enablers.

It’s to protect against governance attacks. I spent a fortune for a small amount of pre-attack LUNA. Now after, for $10 I have massive amounts.

How can anyone complain about unfair democracy, when they pay pennies for massive voting power, compared to people who lost large amounts of money who would have virtually no voting power.

It’s a problem of the voting system being tied to hyper inflation, with the problem that newcomers have a massively unfair advantage of long-term holders.

This was the governance attack risk they attempted to mitigate.

Man I want to say something because all those pre attack Holders are pissing me off. They crying and crying that they got Luna for pennies but never mention that this Lunas aew worth nothing at the moment.

Also the people do not own many of Lunas… the market cap were just many people who put in a very small amount of money in Luna at its bottom because it was a “gamble”. Nobody wanted to lose everything AGAIN. That means that this few hundred dollars are now worth maybe 1,5 - 2k… it’s nothing. A few who went in with a huge amount … they already left and take their profits in other cryptos. They are just short traders. Everyone who stay in at the moment are also REAL supporter of the project.

And do not forget that also people who were in Luna before spent money after the attack. I lost 12.900 dollar. I had around 190 Luna pre attack when it dropped down to 60$. Then they maxized the supply and I didnt went out… that was my OWN fault. I lost nearly everything and I went in low with a small amount that gave me back now at least 3k. But my total loss is still 9.000$.

So please dont piss me off when you guys say we want a burn to take profit and dumps. You guys are just stupid because NOONE own hundred millions or billions of Luna. And even when there are people who have those amounts, then they are the new Luna whales. Come over it and burn Luna Classic. That you have to do for all the supporter that are staying now and want to grow up with all of you.

Everyone paid fair market price. There was nothing stopping you buying more. That’s why the only fair decision making is one luna one vote

But having governance mostly owned by LFG is also a problem is is not? check out LFGs twitter post describing how they spent funds during depeg event they mention buying and staki gnover 200,000,000 LUNA.
Means they can control any vote outcome as they have majority of aroubd 2/3rds of all gov staked LUNA, and they can effectively bribe validators with their ammount by choosing who to delegate to. And now it is locked to delegate.

Don’t know if you noticed but in Terra Station users cannot delegate LUNA anymore, but users CAN REDELEGATE. This means any validator that does not vote LFGs way they can redelegate their massive amounts to other validators, which given the staking rewards right now (in luna numbers) and that accruing luna will give more lunav2…

Vote caps could be put in or node parameters adjusted to account for the inflated supply. there are better ways to control luna inflation in regards to governance. Outright controlling the governance is the very problem they claim to be avoiding, yet here we are governance security IS breached, by LFG themselves.

When I’ve tried to bring this point up here and in the Luna subreddit, it’s gotten removed due to being too controversial. It’s exactly like you said. LFG has complete control over governance, and they fear governance attacks? There are solutions around governance besides just stopping new staking. 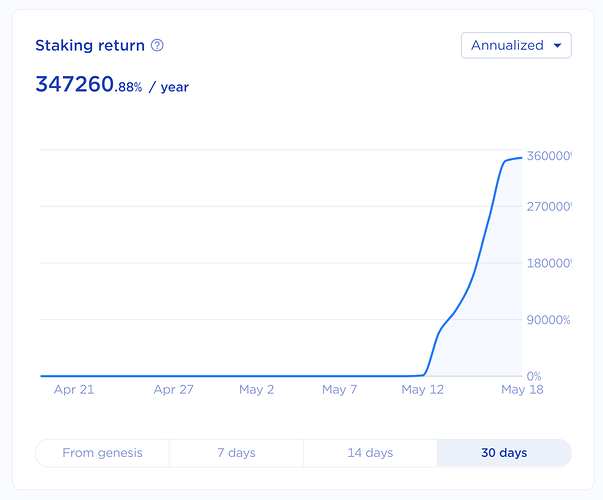