Guys if you lost money sue them immediately dont let them run with your hard earned money!

I told you so before but I received only insults…

There is no other way out than either hoping for outside help or do the fork and focus on rebuilding the blockchain/ecosystem such that v2 has a value and gets one day listed on exchanges.

Gave this to another topic too, but it’s really weird.
The only update after Kwon’s tweets 2 days ago has been on Terra Money Twitter, where they informed all updates outside this account are not real. Literally the next tweet that is put out, is on LFG account instead of being updated on the one that they told was going to be used for updates. Not a single tx id, just saying we threw it and the rest will be used for compensations.

If you were in this situation, wouldn’t you try to get the price as low as you can before you start doing buybacks&burn? After all it’s what everyone has suggested. If they release info they’d do it, the price would skyrocket, whereas FUDing your own project would give you better spots. I’d wait for an actual Terra tweet.

support. I bought Luna and didn’t know they were making trillions of Luna. They need to return the invested funds and this will raise their reputation.

They have transferred the assets from BTC to UST ($1,847,079,725). Why not liquidate the UST and initial the major burn. At the current price of $0.00019 with the UST balance they have they would be able burn all the excess supply (theoretically) and then some.

Ok, they used the BTC to bail out big players (and now come with this “small investors first”).

They DUMPED 800M UST in the market while “defending the peg”

They minted 6T luna tokens and no UST taken out of the market.

For the community, the truth is the original solution of re-launch at 1B is the only exit.

lost everything i have in so called stable coin

hope for best
thanks

Relaunch will literally make everyone’s money go to 0. Stop suggesting non-viable options like fork or a v2 of the coin. It has proven over and over that it would not work. The only solution is to somehow raise capital and burn. No other way out. Any form of snapshot, airdrop compensation, rollback, whatever will not work.

what a joke lfg 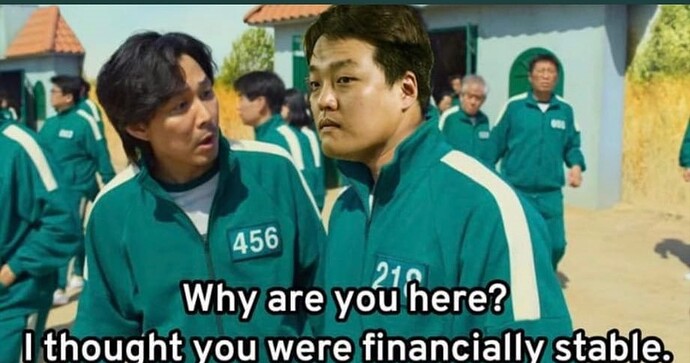 Or unless we build and attract more value to the ecosystem, repay over time with newly generated money that’s not damaged by hyperinflation in the markets.

Ask binance for help. And loan in Busd. But first create a value to invest this money.

they have to burn the ust right away, they can’t sell that ust on the market, it’s the best way to repay the ust holders is to burn here ust

Makes sense why they have been so quiet. Clearly peg defense was terribly managed or was a pipe dream in the first place. Without outside funds buy and burn is impossible. I also dont understand how they think $90m is going to be a good payout for UST holders

Unless I did my calculation wrong, looks like there’s a bit over $230 million left if they sold everything for USD at current market prices.

Why fork ? That’s not a solution. The only reason anyone can want a fork is to redistribute the coins in favor of those that held pre depeg and that would be fraud. So let them implement the gas fee burning proposal and lower staking rewards. We need to start deflating this coin ASAP.

do not count UST and LUNA

As I thought, the first stage is to drive down the price and realize the real desire to redeem at a low price. The second stage announces the real plan to test the market reaction, and the third stage officially runs the plan

They need 1.5b to reimburse UST only!

Its a complete mess

I guess now the fork proposal is better