Summary
After contacting a few of the dev from the Terra team to understand the future of LUNC, they said there is no Classic team to maintain the LUNC. They have no answer to go forward. Additionally, they blocked the delegation at governing for the vote. The majority of current votes are in favor of whatever Do-Kwon said. That’s why the previous voting got rigged everyone knows that.

If there is no team to maintain the classic, Do Kown and his team MUST give full rights GitHub branch of the classic team who are going to work in the future in the core of LUNAC. Please hand it over to the new team to work on.

Validators
LUNC validators must come forward for the future of LUNC to stabilize the network. Rather than current validation rewards, I would like to propose for the validators to get well paid for maintaining the LUNC.

Developers
Developers must take leadership for the people. If bad players in involve, those players must be audited. Instead of sticking with a small group of players, I would like to propose crowdsourcing with open source.

The Current Problems in LUNC
The community wants to build back better, right now we have

We could have burned a lot by designing fee structures. I would explain how fee structures can burn and be profitable to various dev and validators, as well as the benefit for the community.

Some people may think we got no money to pay and cover maintaining the LUNC, but we can do something better with the new governing plan.

Motivation
This proposal will come to form the LUNC Team to move on with new fee structures and governing roles. This comes with

Proposal
We should have two teams, one is for LUNA and LUNC, we could co-exist, but however, the governing structure must change.

Thus, the Terra team must hand over to the LUNA team who are going to work for under the new governing system, we could hire the best and prove that we could move on without Do Kwon’s involvement.

Here, I would like to introduce a new governing contract to get the crypto community to vote.
The Crypto community has crypto cult followers, exchanges, validators, and dev. Without anyone of them, we wouldn’t be here. Thus, we will have Exchanges involved in voting too.

Transparency is important in building trust, we will not select just a few exchanges to vote, and devs to work on, we will have dev from around the world who can contribute and maintain community proposals. The validators will not need a license to run or permission to run from anyone to earn fair shares.

Now, the current situation in LUNC is getting oppressed by NOT getting the right to govern, so I would like to present new governing ideas to adopt to show how the community can build back if they are not going to work or explain who will be working on LUNC.

Here is the link to visit the new governing the contract idea - (first draft) https://www.figma.com/file/5g6GZeW0YfyZ9mIuIPjvbY/LUNC-Contract-Voting?node-id=0%3A1

If you would like to customize and add more, you can simply copy the file in Figma and update it.

This would be a win even for those who aren’t interested in participating in LUNC!

DK, you wanted a completely new block chain, with the brand name “LUNA”. you got what you want.
Now, let us go? Yes?

(I was going to mention DK in this reply but it wasnt allowed, why?
“Sorry, you can’t post the word ‘@xxxxxx’; it’s not allowed.”)

It is indeed time DK either step up and provide the leadership for LunaC future or hand over and go away. And guys please don’t kid yourself into thinking you have a democracy because you can vote. That was never the case. There is no such thing as a decentralised narcissist.

It cannot continue stagnated waiting for one person alone decision and then call it decentralized.

These Dev said that they love working for decentralization… And Sunny proposed in the chat and disabled the staking. 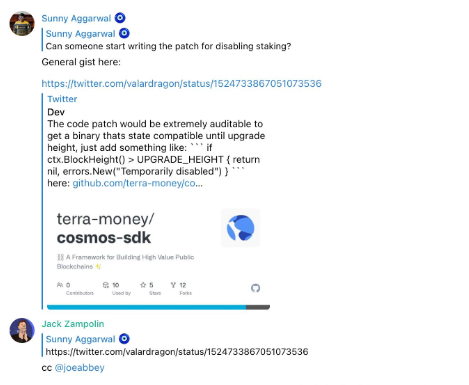 That is done without community approval. It is a dictatorship…

Sunny & his Cosmos friends have blood… They disabled it.

Massive corruption at hand, you’ve moved out of your house time to give the new tenants their keys…

Do you have telegram group for sharing the info ?

And you can read all of their chats at /ipfs/QmP8rwAxNUxJgd2xKnMCzdSLypH63pgCvZ1EipuViAzrv4

It is shame to see the corruption and people get $uicide…

I’m all for it and I’m sure the community is too, but how do we act to defeat this centralised and corrupt project team?

I know a few investors / PE funds who would would put money into something like this.

Transparency is the main object to build the trust in the community. The new Lunc will come up with alll contracts to build up escrow and share all wallets info for transparent, escrow will lock most of assets not to abuse the fund.

I second your suggestion with both hands

I guess it’s time to file a lawsuit against whole TERRA team and DO KWON !
who knows it was an inside job or not ! which is highly suspicious to me based on evidence FATMANTERRA provided on twitter !
they could do so much better , even an uneducated person could handle things much better than they made worse !
after all , why would they care when this is us who are in major loss ! a LAWSUIT will force them to bow down against their community who trusted them unconditionally !

That will be a great start, I have talked with some dev who well know about Terra smart contracts. First of all, we could ask them to bring new governing system. Building the smart contracts for new governance is doable and some of them are okay with PoW for rewards. They could earn up more than their expectations range.

We could show the community how transparent contracts we are having with PoW, PoS, along with escrow services.

@johny Do Kwon, I know you are reading this as well, this will be better for Lunc community and you get what you need with your Luna and do whatever you like with Luna.

How would you stop governance attacks?

I see, you are worrying about the government attack, sure, the current governing could be taken over via whales when delegations rebooted, is that make you worry right?

However, If you look at new governing system at first draft, the whole system is about to change. It is not going to be easily for such attack, we don’t need to halt the voting system. The system cannot be abused and spammed as well, we got fees for that as well as we have roles voting. Please see all slides at this link https://www.figma.com/file/5g6GZeW0YfyZ9mIuIPjvbY/LUNC-Contract-Voting?node-id=0%3A1.

Just a few parts of the chat regarding classic, can someone make better sense of the sentiment

I cannot believe how many people are asking me everyday to vote against fork and add burn.
Would it be possible to make a public commitment to adding the burn after the new chain launches when there is bandwidth
and make it more clear both Terra2 and Terra Classic can run in parallel
just to show them we do listen and care about their opinions
maybe we can even ask CZ to send their attention towards him

21st May
17:35
Alex Ausmus
Do validators for Terra v2 need to maintain support of Terra classic at all?
P

18:15
PFC
It looks like the decision on who is in the genesis has been made.
I see other validators now providing bots & other services to the testnet.
I’m kind of disappointed that no real consultation was done about this, and it has been steamrolled in @Jared_TFL

18:17
this was done after we had discussing who should be in here as well. so It doesn’t seem like debate was going to happen
18:27
for a ‘community run’ chain. all I see is TFL making decisions without consultation.

18:29
Alex Ausmus
So the genesis validator set is already decided on? Thus those that also want to validate will need to acquire tokens and spin up a validator after the chain is running?
P

18:30
PFC
I honestly don’t know. we brought up the question on who should comprise it, how many and so on. but I don’t see any debate or discussion around it… just TFL saying ‘this is what it is’

Why dont we take a poll of people in this chat? I don’t understand enough about the issues to weigh in

19:16
Jared | TFL
we have 30 people, mostly terra protocols and inactive validators who will not be represented in this group.
I can add them if we want to do a poll here.
Maybe @ratentencafe or @hanjukim can give me admin permissions so I can invite.

27th May
15:36
THORchain BULL
When do we re-enablr delegation on Luna Classic?

16:31
danku r
redelegation are possible, no? It is just the new staking
16:41
Vini
it has to be done via chain upgrade not via gov since we hardcoded.

GO implementation of the Terra Protocol . Contribute to terra-money/classic-core development by creating an account on GitHub.

NGINE Seems t be rhe only one with any sense and the only want thinking about the people.