Summary
This proposal discusses the idea of an overcollateralized stablecoin backed by top PoS assets.

If the community believes that “decentralized economy needs a decentralized currency”, maybe we can revive the vision. We can build an overcollateralized stablecoin backed by top PoS assets.

And we can rally the ecosystem around it. For example we can implement a mechanism for the stablecoin to be used as network fee and it be cheaper than the default network fee.

Counter Arguments
→ Hard to gain trust of people in another stablecoin:
Terra wallets, dapps and DeFi had the highest quality that I have seen. And only this high quality of user experience allow normal people to use defi. Still a lot of people need access to a stablecoin and a good DeFi experience.

→ Inflation: This is a problem for all stablecoins for the foreseeable future. If inflation settles around 5% and treasury bonds give 4%, why would you hold a stablecoin? But the people who don’t have access to a good currency, will still use the stablecoins if their own currency is useless or plunging.

→ Competition: yes there are a lot of projects in every ecosystem. Each chain might have their own spell/mim fork. And osmosis has brought in Dai & usdc. Also there is agoric which is building atom backed stablecoin and you can name more.

→ Adoption: This is the hardest part. unlike UST (rip) which had anchor 20% rate as a marketing mechanism, the adoption of the new stablecoin might not be that easy. I dont have a clear strategy for the adoption. Some ideas like being able to spend it as network fee might help. But I dont have silver bullet idea. Maybe as in Ben Horrowits book, “There is no silver bullet that’s going to fix that. No , we are going to have to use a lot of lead bullets”

Proposal
We can build an overcollateralized stablecoin backed by top PoS assets and rally support around it.
There are many minute details that we can talk about. But I just wanted to see how the community is thinking.

Technical Requirements
We already have bridges and have functionality for some bAssets.
The mechanism for the stablecoin minting/burning can be implemented in cosmwasm. (implementing it as a cosmos sdk module takes longer and much harder, using contracts is easier)

The only missing technical piece is allowing a smart contract to mint a new native coin on cosmos bank module. This might need a soft fork. 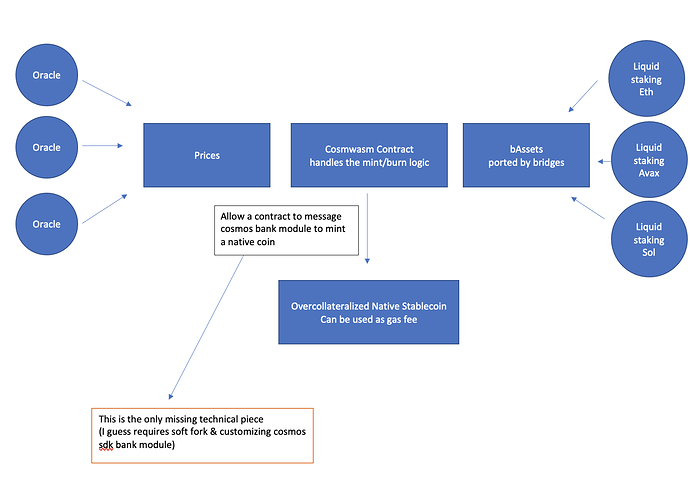 lem for all stablecoins for the foreseeable future. If inflation settles around 5% and treasury bonds give 4%, why would you hold a stablecoin? But the people who don’t have access to a good currency, will still use the stablecoin

i can easily follow your Arguments as well as the counter Arguments.
The only concern i can add, is that people and especially in crypto are irrational. The might still feel, that the stablecoin is backed by “thin air”. When panic spreads, they want to see “hard collateral”.
But thats just a concern, not a show stopper.
I would support it, its better than just adopting USDC. We can at least clone DAI

or come up with something better.
I cant say anything about the implementation.

Unfortunately i have seen your proposal too late, so i just created one by myself.
What do you think about it?
Stablecoin as Nebula Cluster

Happy to hear back from you.
The community seems very sluggish on the stablecoin topic.