Understood that launching Ozone quickly is of high interest to the Terra community - this post is intended to collect community feedback around the Ozone’s mechanism - I will be following up with a plan of action & ask for funding from the Terra Community Pool (which will burn all the Luna contained therein if the proposal is successful) to bootstrap the initial funds for the Ozone Protocol shortly in the future.

Unlike some other protocols where TFL worked in stealth to launch projects, it’s more important for Ozone to be developed in the open in the community as the vast majority of funds plans to be bootstrapped by the community pool.

But for now, let’s dive into how I’ve been thinking about Ozone.

Ozone is an insurance mutual protocol that facilitates levered coverage of technical failure risks in the Terra DeFi ecosystem. Insurers can deposit X UST and provide coverage up to N * X UST to cover various TeFi contracts, N being the leverage constant set by governance. When Ozone is “overleveraged”, the system calibrates itself to its target leverage ratio by increasing the emission of the $OZ governance token to insurers.

The system has three actors:

The insurer can provide leveraged insurance through ozone, which locks up UST for varying periods of time, and earns yield from various TeFi contracts.

Depositing into a covered vault allows the user to purchase ozone coverage for TeFi yield farming in exchange for paying a cut of the resultant yield.

Very cool. Who exactly decides on claim challenges, just a gov proposal to stakers? What’s the mechanism that balances claims in a vault that are above actual UST for the vault (assuming levered above 1)? Will payouts rely on a time delay for claims mixed with ramping up incentives for new insurers to bring in more coverage or will the funds be pulled from other vaults (global)?

But what/or is there…a Insurance against a hacker attack? And could be a hacker attack on Anchor?
I mean…you interact direct from your wallet with the smart contract to anchor.
If your wallet isnt compromised how could be a hacker get access to my funds in Anchor?
(Sorry to ask this question … and maybe it is difficult to answer that but i think many people are a little bit cautious cause many dont understand exactly the function of the interaction between the own wallet and Anchor)

I really do enjoy the covered vaults proposals. Will 100% allow for earlier exploration into smaller protocols that exist in the ecosystem that have been voted and accepted into having their vaults wrapped.

Nice. One consideration here , Ozone governance should be able to allocate funds to fund audits of the projects in which it insures . Not too much of an issue just now , but as this ecosystem grows i see this as an important functionality and a way for Ozone to provide mutual value to other projects in the TEFI ecosystem.

Is there a target percentage on the cost of cover for an insuree (e.g. we’re targeting 2.5% for this umbrella coverage in TeFi or is it variable)? Will each protocol have different costs associated with them based on parameters such as length of time in the Terra Ecosystem, audits, etc?

How much of the community pool is being burned?
Is the plan to still burn everything so that only ~$100m worth of LUNA remained in the pool? That would be great.

Probably a noob question, what if the insurance smart contract gets hacked or experiences technical failure?

Thank you for sharing!

-the cover_fee should be a factor for CV utilization, when an insuree tries to deposit.

-what currency is returned when claim_insurance() is called? oUST or UST?

-when an insurer’s deposit is redeemable post lock-up, are there any constraints when trying to withdraw oUST from a CV? ie, are they held to the same “below utilization ratio = 1” standard as insurees?

-wouldn’t the target_leverage_ratio have to increase over the 4 year period before insurer incentives run out, otherwise we can potentially see utilization ratio skyrocket (ie, very under-insured) as insurers seek better return elsewhere?

happy to try contributing ideas after i understand the ozone proposal a little better.

“The deposited UST has a 1 year lockup period.” It should already at the beginning have different time periods so users can play/test it.

UST holder’s yield dilemma - should you use UST for anchor deposit (20%, no time limit) or for providing coverage?

And if it is technical risk, what is the possibility that same risk applies to ozone protocol?

Thanks for this! Looks cool!

I fail to see how and where the community funds will be used. Are they used as an initial standalone insurer? Community fund*n leverage? Is it put in the global insurer pool UST direct without leverage? I guess this makes sense but it isn’t specified.

Can we refer to the ozone token as something other than $O3 for discoverability purposes?

I say this because on twitter, a dollar sign followed by a symbol is (a “cashtag”) is commonly used for discoverability (effectively hashtags for stocks). However, cashtags do not support digits. If you compose a tweet with $O3 in it, there will not be a generated cashtag and the “$O3” will not be clickable.

How is this summary? Looks like Anchor but with one additional layer in the capital structure. 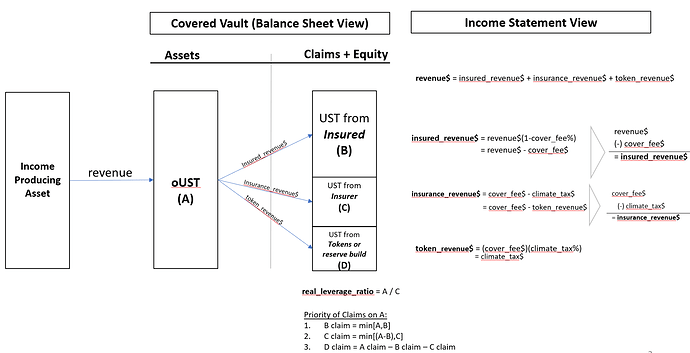 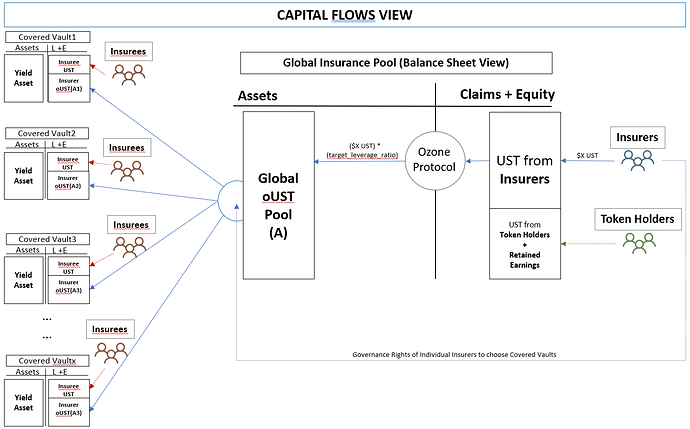 It was a great read, thanks for being open to the community for this! Based on the writeup, it is easy to visualise how this protocol can achieve a balance between solvency and capital efficiency.

What i like best about it is that insurers do not actually have to buy the O3 token, but can provide UST directly in return for a potential yield instead. This leaves us with a clear segmentation of the two groups (insurers vs governance), which allows us to incentivise each of them accordingly during the bootstrapping phase (probably insurers > governance).

I hope the community can engage on these topics as they are very important. Imo i see these issues:

Lastly - do we already have some details on the below?
a) Is there a cap on how much oUST can be provided to a single CV? (i.e. 1x UST deposited)

Thanks and looking forward to some dialogue!

In my opinion insurance for Anchor should have just been built in natively at the Terra protocol level, the biggest risk for anchor is luna(collateral) being susceptible to fast falling market prices due to its nature and lower liquidity than top coins.

In fast falling Luna market conditions there might not be liquidators holding hundreds of millions of UST on hand, and liquidators might be hesitant to liquidate if they expect by the time they liquidate the price of Luna to fall more than what would be profitable for them. This is exactly what happened to Makerdao’s Dai on March 12, 2020.
That day nobody was willing to liquidate undercollateralized positions due to the price of ETH falling incredibly fast in a short time, Dai was left undercollaterlized and some borrowers were left with nothing. Makerdao ended up printing new Maker tokens to recollateralize the system. This very same Keeper liquidation system that the first version of Anchor’s whitepaper criticized is unfortunately the one we have today.

A much better insurance system for Anchor would be to have a last resort mechanism where if there’s no bids for collateral, the protocol itself natively liquidates bluna by converting it into UST at the oracle price to guarantee the solvency of the system. The insurance should also be extended to guarantee the issuance of new UST to depositors when they attempt to withdraw aUST in the event that a hacker empties out all value from anchor. This would be inflationary for UST only in the absolute rare event that this safety-net insurance mechanism has to be used, but given UST’s resiliance and its peg guarantee mechanisms it should be able to handle the price pressure perfectly from such an event.

I see this solution as much better than having a third party non native insurance protocol which relies on constant subsidization. Ultimately insurance providers have to consistently make a better yield on their locked capital pool in Ozone than they would on Anchor and themselves getting insurance, which will probably only be sustainable as long as there’s incentives by $O3. Also, with the native insurance solution there’s no need for depositors to pay a cut out of their 20% APY, and if we want Anchor to be the equivalent of a decentralized FDIC bank, insurance should already be provided for all depositors, especially since Anchor itself as a standalone product is being advertised as a Savings protocol. Meaning it should already have insurance built in since we’re ultimately talking about people’s savings, something not to be taken lightly.

However, at the very least if Ozone development continues the same, since subsidization is already planned I don’t see why we can’t achieve a target rate insurance premium for depositors of less than .5% out of that 20% APY to make it as negligible as possible at the very least.

a) i believe oUST provision is the constraint for the UST deposited i.e. it’s only possible under normal circumstances to overfund a CV but not the other way around.

i) A related question will be - what happens to oUST when the target_leverage_ratio changes? I’ve already minted 100 oUST at 1:1 and if the multiple changes to 2, do i magically get some oUST in my wallet or will my oUST that’s already “staked” in a CV get multiplied by 2?? Sorry if asking this question here makes it messy1

chor would be to have a last resort mechanism where if there’s no bids for collateral, the protocol itself natively liquidates bluna by converting it into UST at the oracle price to guarantee the solvency of the system. The insurance should also be extended to guarantee the issuance of new UST to depositors when they attempt to withdraw aUST in the event that a hacker empties out all value from anchor. This would be inflationary for UST only in the absolute rare event that this safety-net insurance mechanism has to be used, but given UST’s resiliance and its peg guarantee mechanisms it should be able to handle the price pressure perfectly from such an event.

I see this solution as much better than having a third party non native insurance protocol which relies on constant subsidization. Ultimately insurance provi

Anchor already has a yield reserve pool for emergencies such as this. In extremely bad circumstances, iirc Anchor governance tokens are also used as backstop of last resort.

@fusion The yield reserve is only useful for when there isn’t enough yield being generated by borrower’s assets, it doesn’t at my knowledge provide any type of insurance mechanism for a black swan liquidation scenario. Also ANC is not used for insurance of any type, what were you referring to?

I have the same question… why have insurance at all? Either the entire system is secure or it isn’t.

What possibly insurance claim could I make that would be believable? Let’s say luna “disappeared” from my wallet… this went where and by who? Who would do the “insurance investigation” for example if the problem was with a smart contract related loss?

I am assuming funds are safe and there would be zero insurance claims … but if there were claims, would it not be possible that the number of claims would be massive? And what is to keep the hacker from stealing and making a claim?

Just gaming this out in my head…