[Proposal] BURN and REMEDY fee with each LUNA transaction 💊 [PART I]

It’s crazy what Do is doing, just baffling…

Yeah, DK is telling “everyone” in the Community to vote via Twitter, but “everyone” can’t vote

just another manipulating way again. Im sick of the games.

@HelloThere I hope you see how the community appreciates this. When you started this, your time was not wasted. And like figment (one of the validators that said NO with VETO to Do Kwon) said, he thinks the proposal should go back up again, and I think there is a very strong chance it is going to be the winner.

Even though the “additions from comments” section in this discussion, and the implied aspect of the discussion of the formal proposal (since it implied that this could save the current system), the proposal itself does not reference back to the discussion, and does not explicitly state that it would stop the fork from happening. It could meet that portion of the goal of the proposal (if I understand the proposal discussion correctly - if not, then disregard this comment) if TerraForm Labs decided to retract 1623 if this proposal passes first, or if 1623 fails with “No with veto” and TerraForm Labs decided to give the current Terra ecosystem another chance. But, if they both pass, TerraForm Labs could implement 1273 on the current chain, and continue with the fork (at least the way 1273 is written).

Unless you have a commitment, or an indication, that TerraForm Labs will see this proposal as intending to prevent another ecosystem from being created from a fork (or you are intending to work with TerraForm Labs to see if they may turn over the current ecosystem), then it seems like you may need to pare this proposal with another proposal that specifically attempts to preserve the Terra infrastructure and would not allow for forking. That complimentary proposal would need to pass in tandem with 1623 - both having the opposite effects in regards to a fork (with the second passing at the same time or a little after 1623). Or, again, to determine somehow from TerraForm Labs what their intent will be if 1623 does not pass and 1273 does (will it pursue another proposal to fork, or will it see 1273’s heart being that the proposal was attempting to save the current Terra ecosystem).

I do not say this for any other reason than as I read your comment it hit me that I probably should point out that observation (it had not occurred to me - I was working so hard on the proposal that I was working with).

I also do not say that to disparage this proposal (although I have mentioned my concerns with it to @HelloThere ), but I think that as you push forward that you consider this in case your proposal does pass (since it is pretty close), that you begin to move to the next stage of thinking so that it does not pass and then not end up providing you with what you all worked so hard for and thought would happen through this proposal alone (the way it is written in the proposal).

If you are not able to get a commitment form TerraForm Labs, then there are a number of proposals out there that explicitly state in their proposals that it should not fork, maybe one of these could be a compliment to this proposal (unless I have misunderstood and this proposal is considered by this discussion community to include either a fork or no fork option as its intent). Here is a list of current proposals (in addition to those that are whitelisted):

I truly hope that helps a little bit - the community that has mobilized around this proposal has been an inspiration to see how hard you are working.

They can burn even if a new chain is launched. Luna Classic is its own ecosystem. I’m sure they will eventually add a way to burn ust and luna for this chain.

There are 14 hours left until voting closes. Many in the community don’t know how to vote. Here are the specific steps to vote:

Your holdings on the $LUNA exchange (Binance). You can withdraw to the terra chain.

You need some ust when voting. So you need to exchange some ust in terraswap, 1 ust is enough, 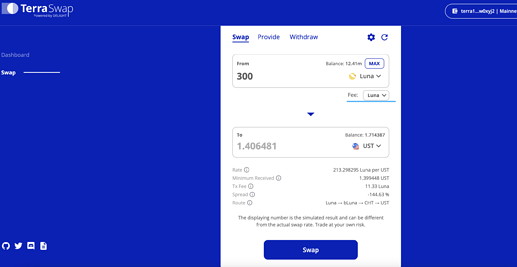 Then go to the voting page https://station.terra.money/proposal/1273/vote

It will not tally. Many of get the same as this post:

The captain of the ship and most of his officers are in their escape pods from the on-set.

The rest of the crew are still trying to save the ship.

Will the ship be saved in the final hours?

“ Can we text On Email too many community restrictions On here”

Be aware of this SСAMMER above!

How do you get the ‘keys of the network’? I mean the basic code for that? Isn’t it property of the LFG?

Move the Luna tokens into a tera wallet and vote people!!

I thought that was forbidden

The CEXs have to be on board. I think Binance would be (plus they already have such a burning implementation for some other trading pairs).

The trading volume for LUNABUSD on Binance is high, so plenty of Luna would be burned.

Not sure how enforceable the proposal is without CEXs agreeing. Maybe CEXs could simply list the trading pair without the trading tax. This would be the major flaw in the proposal for me (plus 3% is unnecessarily high - I imagine something like 0.1% per buy and 0.2% per sell).

all this time, like many project participants, I did not know about the attack, people wanted to save their money, everyone thought that the entire market was falling

and give an answer, what should people do with mines on binas, how will the distribution go there?

write a clear plan of action

I mean, the 3% is way too high, but that can easily be adjusted, since it was basically just a random number that was chosen as an example (even though it ended up in the proposal).

You would have to somehow incentivize the CEXs to implement the burning mechanism. Maybe the ones in charge could regularly airdrop the CEXs a percentage of the burned fees as a rebate. I’m sure someone would think of something to encourage the CEXs to take part.