Hello, everyone! Our team at Router Protocol recently submitted a rapid grant proposal to the grant committee, and we are thrilled to announce that after much deliberation they have approved our grant request. Before moving forward, we feel it is necessary to introduce our project to the Terra community. We would like to engage with the Terra community members and get their valuable feedback.

What is the team’s long term vision for the project?

We, at Router, are committed to building a bridging infrastructure that facilitates interoperability between blockchains. Such an infrastructure will a) allow for a range of use cases that leverage and extend the composability of DeFi across various blockchains, b) promote liquidity migration and developer efforts towards various emerging chains and solutions and c) eventually lead to a thriving multi-chain ecosystem that will onboard the next wave of crypto users.

What is the problem that Router Protocol is trying to solve?

The crypto industry was built on a fundamental premise; the fragmentation and limitations endemic to traditional finance needed to be replaced with a better, more robust system with user needs at the heart of it. Unfortunately, even the crypto market is littered with fragmented liquidity pools and creating the infrastructure that bridges the gap between them is becoming increasingly important. With over 5,000 different cryptocurrencies on the market encapsulating trillions of dollars in value, there has never been a more pressing need for porting liquidity across them. As more institutional investors join the crypto space, the need for better efficiency and flexibility increases almost exponentially. At Router, we believe that the crypto industry does not have to suffer from the fragmentation seen in traditional finance.

What is your team’s proposed solution to the problem listed above, and how does Terra come into the picture?

To combat the problem of liquidity fragmentation, Router is building a host of cross-chain infra primitives that will allow seamless flow of liquidity across chains. Aside from connecting blockchains and enabling a free flow of information, Router will also enable token mapping in a decentralized environment.

With over $3B in liquidity and a large user base, Terra is one of the most popular blockchains in DeFi. To realize our goal of becoming a liquidity super-mesh, we need to deploy Router bridges on all the major chains, Terra being one of them.

Do you have a working product?

Router’s XCLP testnet is live here. It currently supports cross-chain transfers and cross-chain swaps between Kovan (Ethereum testnet) and Polygon testnet, and other chains will follow soon. For tokens with liquidity reserves on both sides of the bridge, transfers/swaps are almost instantaneous and require very low fees. For some tokens that do not have sufficient native ‘on-bridge’ liquidity on one or both chains, transfers/swaps might take a bit longer and cost a little more. Here the costs are primarily driven by the operations of the underlying AMM.

We also have a internal mainnet which is undergoing a security audit from Halborn. We have already completed a security audit from Certik, details of which can be found here. Since the security of cross-chain projects has been under scrutiny as a result of recent hacks, we thought it was prudent to get a second audit to cover all our bases.

When users submit their asset on the source chain, they are converted to stablecoins and locked in the source chain’s ParaRouter. The conversion to stablecoins takes place using an aggregator contract that fulfills the swap using the DEX that offers the best price. If the user-submitted asset is a stablecoin itself, the asset is directly locked in the bridge contract. Following this, the ParaRouter reserve on the source chain emits an event to be received by the listener interface attached to the router nodes. Upon receiving the event, listener parses the event into a general bridge message and relays it to the router interface. The router interface forwards this message to the writer interface, which converts the message to a valid proposal and submits it on the target blockchain. Once a proposal is created on the destination chain, other router nodes sign the proposal. Once the voting threshold is achieved, an executeProposal call is initiated, which releases the funds from the destination chain’s ParaRouter reserve and credits it to the user’s wallet. In case the user-requested asset is not available on the destination chain’s ParaRouter, the ParaRouter uses aggregator contracts to convert the stablecoins to the user-requested asset on the target chain. 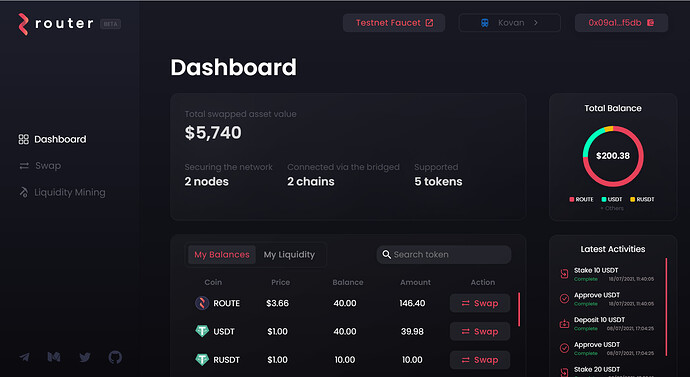 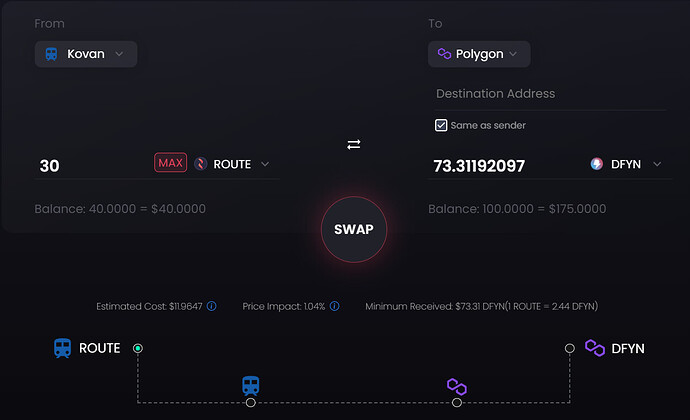 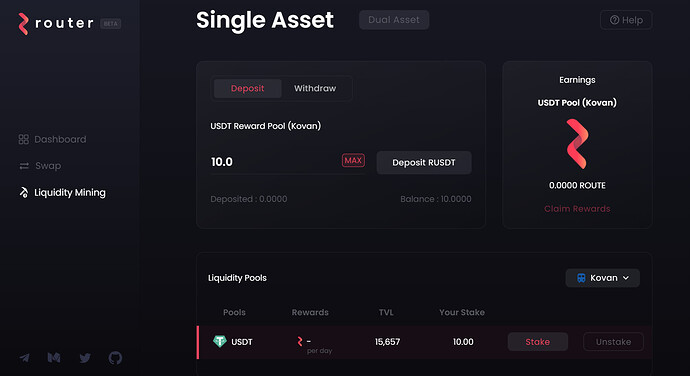 To ensure high throughput while maintaining protocol security, Router Protocol will initially operate under a trusted federation model, i.e. the validation mechanism will only be partially decentralized. However, in the spirit of DeFi, Router will eventually achieve full decentralization and trustlessness in a phased manner:

Phase 1 (Current version) - The validators are selected via a Proof-of-Authority mechanism wherein they are required to stake $ROUTE tokens (Router Protocol’s native currency). To curb any kind of malicious behaviour, validators are required to stake $ROUTE in value equal to the protocol’s AUM. Any validator having excessive downtime or engaging in any kind of malicious activity will be penalized by having a portion of their staked $ROUTE slashed.

Phase 2 (4 - 6 months) - Validator selection will move to a Delegated Proof-of-Stake (DPoS) mechanism. More validators will be added to the network and a Multi Party Computation (MPC) system will be set up to validate transactions.

Phase 3 (8 - 12 months) - Router will build and host a dedicated chain (tendermint consensus) to host the aggregator infrastructure. Consensus for all cross-chain transactions will be achieved on this chain.

How will this project be integrated with Terra?

First, a custom bridge contract will be coded for the Terra chain. Since Terra is not EVM compatible, we will not be refactoring our code from the Ethereum bridge contract. We will have to custom-code the contract from the ground up. After rigorous testing and audits, we will launch a Router bridge between Ethereum, Polygon and Terra. Router bridges on Solana, Avalanche and Arbitrum are also in the pipeline. After the launch of the bridge, we will be able to allow for seamless communication between Terra and other blockchains.

How can the project benefit Terra Network’s ecosystem?

In bold → Milestones
T0 → the start of the development

Specification of the software or deliverable (will be used to confirm milestones have been reached), and the cost involved in each milestone

Total estimated duration and cost of the whole project

To facilitate transparency, our team will provide brief progress reports for the work done at the completion of each milestone. To ensure a smooth collaborative experience, a telegram/discord channel will be set up for integrations and project discussion.

The committee discussed this proposal thoroughly and decided to approve a Rapid Grant of $42,000 UST. Pros and cons identified for this proposal are summarized below.

I hope you are well. We have not heard from you since your grant was approved by the committee. What is the status of this project?

Me again, any updates on this protocol?

Hey @somethingelse ! Due to certain security considerations, we had to delay our mainnet launch between EVM chains. That’s why we are running a bit late on the Terra front. As for the current status, the Terra contracts for the Router bridge are coming along quite well. Infact, we have already started talking to audit firms to audit our CosmWasm contracts.

Hey @Vatsal thanks for the quick response and apologies for the delay in response on my part. I appreciate the update. So it sounds like it is safe to say we will not be seeing Router Protocol on Terra for a few months given the massive cost and lead time that process takes.

May I ask that you fulfill the following obligation in full:

To facilitate transparency, our team will provide brief progress reports for the work done at the completion of each milestone. To ensure a smooth collaborative experience, a telegram/discord channel will be set up for integrations and project discussion.

Hope you are well. Did you get a chance to see my last message from 15 days ago? Would love a response.

Hey @somethingelse, pardon me for the lateness of my reply. As far as the reporting obligations are concerned, I would be happy to share a progress report delineating the current status of our undertaking. Let me share the report by April 11th (Monday).

Very professional and thought out update, I truly appreciate this and look forward to more updates!