A new moon is rising, let’s burn the old moon 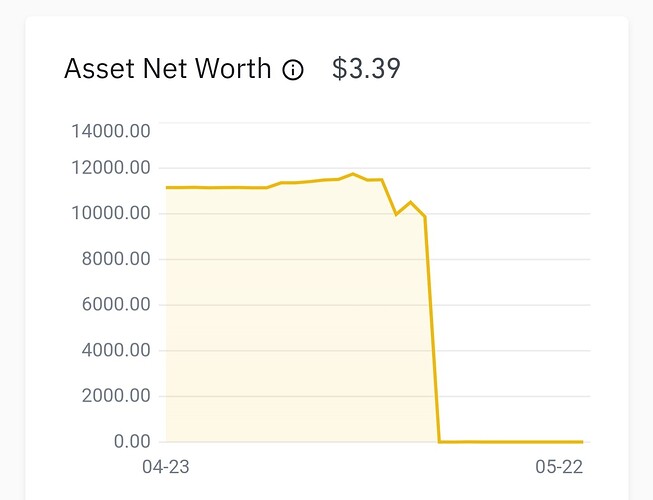 I burned my whole binance account on 2022-05-12 because I bought LUNA after Mr. Kwon had tweeted about a rivival plan.

Stupid me, didn’t know about the hyper inflation that was going on and the next day was already to late and my account was totally cleaned.

How poor are you guys?

Will this shit ever get back to 10 cents?

At this moment, with current supply 0,10 cent would mean LUNA would be as big as the whole crypto market added together.

I don’t see this happening in our lifetime but who knows what will happen if they change some core rules/repeg and or find a magical wand.

How many tokens need to be burned to reach 10 cents?

Uhm… Rather than outright burning money to try and bring it value that may be done better at a more consistent en masse rate through low but significant tx taxes and such.

Best way I see to bring LUNA value (other than somehow fixing UST peg issues) is to USE it. It is still very useful on the Terra blockchain. Many dApps in Terra’s ecosystem are up and running most severely crippled.

Not financial advice, may help the chain chug along and encourage developers to stick around if the dApps they have on chain are used and there’s trade/a market. Otherwise why stick around where there’s no use or customers? Given situation, probably pretty risky. But sending to burn… hope it works but like burning fiat money to make it scarcer…hrm…

Using LUNA and UST helps take it off the immediate market and might even be used to garner returns. It’s a little awkward, as everything on the Terra chain priced in UST and LUNA, which are way cheaper currently so seeing $1000 UST or 10,000 LUNA on chain is not all that much

Astroport and Terraswap liquidty pools could use help / are low, as they are a basis for much of the market system’s functionality. The APYs on chain are pretty nice right now since liquidity is so low especially using a protocol like Spectrum’s which autocompounds profits from LP pools back into the same LP pool, nice.

Anchor’s still making proposals and ideas in their governance forum but no live votes yet looks like, and unlike Terra, Anchor gov staking is open (sorry all if this causes some chaos).

While LUNA governance staking is disabled, various LUNA autocompounding staked tokens still exist and are available for trade such as stLUNA and bLUNA (from LIDO), yLUNA (Prism Protocol), LUNAx (Stader Labs, not sure if still available). These staked LUNA derivatives do not give holders voting rights (but they do to validators behind them which are rather varied as I recall), but they do autocompound staking rewards which given mass LUNA inflation is insane right now (in number LUNA rewarded, not in current USD value), so is just one way to accrue LUNA if that is a goal.

Other than that so many good protocols and their tokens: Kujira, WhiteWhale, Pylon, Luniverse, TerraLand, the list goes on and on, some still available and many unclear if they exist new terra chain, old, both, or another chain completely. Gotta follow their individual media and forum posts, many have yet to figure out token distribution and now may be a good ground floor time, others may already be closed off during transition.

Point being, Terra chain meant to be used, straight buying and burning LUNA is pretty much just throwing away money rather than using it - use is a big part of it’s value, so by all means go ahead but leaving the burning such massive supply up to little guys tossing barrels full, ouch! There might be other ways to bring value to LUNA as a user and leave burns to the system/governance (and what about UST? may have to buyback and possible burn or make bonds or somethin) without martyring wallets.

Anyway just seems saving the chain while ignoring using the chain … and perhaps how to revamp LUNA’s role and promote it’s use (opposite pushing mass ust expansion) may be better short term as proposals are worked out. Though the burn CT Twitter campaign along with eToro relisting LUNA probably pushing buying interest. Find a use for LUNA people may keep buying it, locking it up, using it. (Edited spelling mostly). I just can’t get behind encouraging people to burn their peronal holdings in a group bonfire that has no clear guarantee of effect except definitely burning their holdings and causing losses.

If you care about the ecosystem, then use the Terra 2.0 which is the improved version.

Terra 1.0 supply is in the trillions, if everyone burn 99% of his Luna we might have an effect.

Personally I’ve burned 50% of mine atm. I’ll burn the rest next week.

Imagine a fiat state economy where citizens/marketplace decides to set fire to stacks of bills to make them less scarce against trillions printed, who does that? Why be comfortable asking people to just purely sacrifice finances? Thus is one step removed burning fiat bills except fiat > crypto > burn. There’s way better investments than if that is what it is come to. Meme coin fad pump n dumps worth it? Wow what a waste of all of Terra chain’s infrastructure. Debit cards based of UST and Anchor had just gone live perpetual charities based off returns from deposited donationsz all the art and gaming…
Even if believe in Terra 2 having a chance and value then destroying personal LUNA and UST now is destroying airdrop amount of LUNa 2, crazy (O’m against fork btw and not claiming airdrop until wait a long while and more clear on Terra 2 chain and legalities/taxes etc if I claimed).
Using communal/ecosystem wide proposals and market incentives and blockchain use, direction, creativity, seems to me much more practical. Ok even if LUNA meme-ish, imagine DOGE had a market and infrastructure of a couple hundred dApps - that’s LUNA and UST. If DOGE had that would burn it or use it? LUNA still has value and burning is thus burning value and might be burning hopes too, which if so will damage terra chain and terra ecosystem reputation if regular people throwing away money sacrificed to nothing.

i agree. burning is not as relevant as solving the underlying problem. Inflate supply to ppl exiting ust fairly, rather than allowing only arbitrageurs to profit while ust is off peg. terraclassic.org

Do Kwon’s tweeted before he likes watching chaos, there’s that. Provides a tweet don’t burn here’s address don’t burn again here’s address again. Mistakes chaos for tricks and panic. Chaos always around if look, often feeds positive, people just don’t call it as such or see it, and apparently not the type Kwon appreciates or maybe doesn’t even see or just not what gets his rocks off ;p Knocking over anthills and destroying toys for kicks is miniscule chaos out there, but shouts in our faces. Easy for kids to get stuck on.
Yeah what you say, underlying supply and all. It’s a big prob to tackle gonna require fundamental mass changes not individuals throwing money into blackholes

If burn and remedy proposal had passed, %1 from income from taxes were going to people like you and you would have a good chance of regaining your losses. But under these circumstances, I am really sorry for guys like you…

I hope it works but I really don’t think it will. People will call me a vulture, I don’t understand that idea. Maybe I am, I don’t know. I saw an opportunity I thought was good, so I put some savings into Luna. It didn’t work out well. I am disabled with no income, only a little savings. I will be homeless eventually at the rate my life is going right now. I just thought this is the universe, or God, reaching out to give me a break but now I understand God would not give me a break at the expense of many many others who lost their savings as well. So now I just feel naive and sad about the whole situation, and I look at how Do Kwon talks to people like an arrogant angry child and it’s really disheartening that such a brilliant person would have such a terrible attitude, but at the same time he will claim he only cares about the community over him self. So I don’t know, maybe his angry arrogant outbursts are nothing personal to people but a lack of self control. Maybe Do Kwon really does care about others. Sorry to write a book here anyway, it’s late. I’m going to sleep soon.

Burning Luna is not comparable to Doge and any other coins. Burning Luna means undoing minting. And there is no coin there with that unique history.