Holding LFG to Their Word? - "The Foundation is looking to use its remaining assets to compensate remaining users of $UST, smallest holders first."

Summary
LFG announced its intention to use the remaining assets (presumably the reserves) to compensate the remaining users of $UST, smallest holders first. At first glance, it sounds like they decided to implement some variation of FatMan’s proposal. This “compensation” should go to those who held $UST pre-attack (as described in @FatMan’s proposal), but setting that detail aside, we have heard nothing about this since this tweet was put up and it is unclear if this compensation is intended to be provided separately from Do Kwon’s most recent plan (which only compensates pre-attack $UST holders with 10% of the new $LUNA post-fork). This is an appreciated gesture, but $UST holders pre-attack purchased $UST precisely because it was not a speculative asset and whatever 10% of this new funny money turns out to be worth, it won’t be enough to make us even close to whole with what we lost holding a stablecoin. 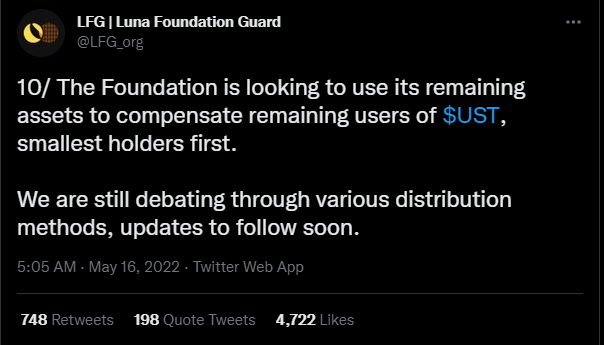 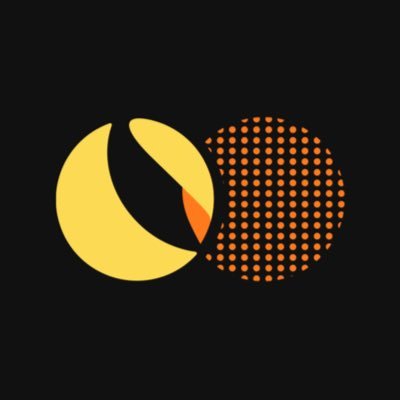 @LFG_org
10/ The Foundation is looking to use its remaining assets to compensate remaining users of $UST, smallest holders first. We are still debating through various distribution methods, updates to follow soon.

@stablekwon
8/ We believe this token distribution, in addition to best efforts by LFG to make $UST holders whole, best solves for the varying interests and time preferences for each stakeholder group, and most important, creates the most viable path to revive the Terra ecosystem.

Is there a plan to make $UST holders whole?

Motivation
LFG and Do Kwon should be held to their word. It is seeming more and more likely that they would rather sweep pre-attack $UST holders aside and put the focus on their shiny new fork idea that the majority of the individual community members do not even want (as seen in forum polls).

Proposal
I propose LFG make clear what their plan is to compensate $UST holders pre-attack. I propose they adhere as closely as they can (depending on remaining assets available) to FatMan’s proposal.

Yeah. I have been asking this everywhere as well. No answers given. Seems strange.

Apart from the old tweets in the header, what information about the refund has not been received yet?

DYOR, stablecoin is never risk free in crypyo, even USDT is not without risk.

I also strongly agree with this idea.
As time goes, more hurts to small wallet users.

The point is these tweets from 05/16 vaguely reference the intention of compensation without any specific plan or timeline. That is the only information that we have been given and, since then, all of the focus has been turned to the potential fork. With Do Kwon getting the “#TerraIsMoreThanUST” hashtag going. I am suggesting LFG must establish their plans for this compensation to UST holders with the concern that they would prefer people forget about their statement on this and never pay anything out.

LFG was created for UST.Use it for something else is unacceptable.

They need to buy back ust at the current market for remaining of the funds and burn it with UST they are holding. That would remove almost 2b UST of the market and help get old chain to get ust peg as high as possible in the future.

DK this is at least what you can do!

Can someone post that as a proposal on station?

@stablekwon
Yes - trying to figure out best way to do this

USDC is risk-free 1 to 1 USD in an audited bank account.
USDT is 70% USD reserve and 30% Short-Term Commercial Paper.
mtga, DYOR is not helping this community now!

He never thought of compensating ordinary users! Let LFG release this news just to suppress the price of UST, and then he released another news himself. At that time, the price of UST rose from 0.05 to 0.15 in an instant. He was just using the news to make money. He is a liar, a devil

There’s a much better date choice for “aUST rekt/doom” time. May 11th, 3am is when UST dropped below 50c/$. Anchor holdings were ~35% what they were on 5./8 “pre attack” date. Those who sold/withdrew from Anchor pre “doom time” both profited (relatively) and contributed to depeg pressure.

This is a good change, but a different “preattack date” should be chosen, and UST bound in LPs should be included. May 11th at 3am GST was the point that UST fell below 50c/$ market cap for the first time. Anchor deposits were 1/3 to 1/2 May 8th levels at that time. Everyone who withdrew from Anchor between the 2 dates had the opportunity to cash out at much better levels than revival plan compensation, and can possibly be partially blamed for death spiral pressure. Many would unfairlly dou…

So, LFG/TFL, v2 community, v1 governance could all choose to add rewards to this group.

I’m still unclear if LFG is doing something separate to take care of UST holders or their early tweet was premature and it’s all part of the 1623 proposal. Can anyone clarify?

Per Do Kwon’s tweet shared in Johann’s comment and LFG’s tweet in my main post, it at least seems to be the case that using LFG’s remaining reserves to compensate UST holders is separate from the token distribution to UST holders given out as part of proposal 1623. The remaining LFG reserve funds should have no role to play in proposal 1623.

The concerning part is that they have provided no update on a specific plan or timeline for this compensation to be given out. The focus seems to be entirely on proposal 1623.

LFG reserves without UST aren’t much, maybe 80m in total? There is no way in the world this will be enough to compensate most people https://dashboard.lfg.org

At this point, I don’t think UST has any chance of coming back or retaining much value. Do Kwon and LFG have more or less publically abandoned it at this point with their recent #TerraIsMoreThanUST motto. I would like to see LFG convert the entirety of their $185M remaining reserves (including the UST) to USDC and pay out to all wallet owners that held aUST prior to the depeg up to a certain cap.

The cap should be determined from a utilitarian standpoint–the most good for the most people. Whether that’s $50,000, $20,000, $5,000–I would leave it to LFG to propose to the community with full transparency in how they determined it.