Proposal to burn the community pool

In March, we voted on a proposal to “burn all seigniorage.” One of the key promises in this proposal was that we would have “regular proposals to burn proceeds (funds in the community pool).” There haven’t, however, been any further burns… Until now.

There is over 63 million LUNA in the community pool, which translates roughly into $1B UST and ~6% of total LUNA. Do has mentioned the idea of using this LUNA to bootstrap Ozone; however, he has also admitted that Ozone will be fine (even without the bootstrap) and that this decision is ultimately up to the community.

I wanted to put out feelers in the forum before I actually propose this on Terra Station. Is anyone else in favor of the burn?

Times have changed mate, we are using this to bootstrap $0Z, see the posts below

I’m aware. However, Do himself has said that Ozone will be fine even without the Bootstrap. The decision is ultimately ours on how we think we should use the Community Pool best. This post attempts to get a feel for whether there’s enough support for the burn.

Just be careful you don’t lose your Luna deposit if you create a proposal and it comes up against a no with veto powers… As it stands, with Do/TFL still formulating their/his own proposals for Ozone, which are evolving, I think you will be vetoed. And that is probably fair enough, although I do share some of your feelings.

"If a proposal is rejected based on ‘No with Veto’ votes, the protocol will burn the Luna deposited.”

IMO maybe a halfway house, what would previously have been staking rewards, which was re-routed to comm pool gets used for Ozone. This should be about half the comm pool. Remaining comm pool gets burned, leaving say 10m Luna in there, as that will be it once Col-5 launches, and all future burns are permanently burnt.

Ozone gets a massive kick start, but not crazy, Luna holders get a good burn, and a genesis drop, and the comm pool is left in funds.

I don’t think any of the community pool or seigniorage should be used for anything dilutive, so I think we should burn it all.

LUNA is supposed to increase in value as demand for UST goes up–one of the best selling points for LUNA. Allocating any of the seigniorage for: oracle rewards, incentivizing apps/projects, or to cover exploits where a hacker walks away rich; all dilute LUNA’s value, and undermine LUNA’s selling point.

Transaction fees can cover oracle and staking. Terra is great on its own and doesn’t need to incentivize apps to further its adoption. And, although, using seigniorage to insure deleted funds would be OK, covering stolen funds would still have a dilutive effect, so I don’t like the idea of bootstrapping ozone (granted, I’m not sure exactly which scenarios Ozone will insure…).

Terra is great on its own and doesn’t need to incentivize apps to further its adoption.

I’m afraid you don’t get it if then.

I also don’t understand why people are so afraid of using the community pool even if its “dilutive”, the reason it’s here in the first place is to be used (granted it has maybe accumulated too much which is why there was a burn, but let’s not forget its purpose either) , and it won’t be able to happen on such a scale anymore after col5 so let’s not act like using it is “undermining LUNA’s selling point.”

My belief is that the community already voted to burn all the community pool funds into perpetuity, so I don’t like the fact that we’re going back on our word. If we want to use it for Ozone, that’s fine, but there needs to be a vote first. If there isn’t, then we should proceed with burning as agreed upon.

As a side note, I don’t mind using the community pool for growth, but I don’t really love the idea of Ozone (I generally think risk is shared across the entire Terra ecosystem, so if one system gets hacked, Ozone is screwed anyways).

Hey Rook - so to make this proposal, you need to make a CommunityPoolSpendProposal with the destination address zeroed out - address in the “Proposal to Burn All Seigniorage” agora post made a few weeks ago.

Curious how all this turns out - best of luck!

Agree. Fast growth even if a bit more dilutive is worth it in the long run. If you want a short term gains then sure burn it all.

Same reason why successful tech companies like amazon, facebook and the list goes on all has raise money to fund faster growth even though it diluted shares. Terra Luna is only a few years old, that’s really young. Don’t think for a second that Terra Luna has already cemented its place as top dog in the space.

There will be both centralized and decentralized projects looking to compete down the road. Best thing to do is to bootstrap and expediate promising projects in the ecosystem with community fund to extend Luna’s lead and build economic moat. We need to get LUNA’S network effect so far ahead that it becomes a disincentive to compete rather than integrate with Terra Luna ecosystem.

What about using 100M$ to fund ozone and burn the rest?

While I think burning all of the LUNA in the community pool would be a great thing for us and increase the price short term. Wouldn’t the creation of the UST for Ozone do the same exact thing? I believe that if we have a significant reserve of capital for Ozone with $1B from the start that will allow TFL or others to attract larger institutions/companies with large holdings into Anchor & Terra ecosystem much faster with the backing of the larger reserve for insurance purposes. We have to keep in mind that the whole purpose of Terra is to create projects that increase demand for UST/stable coins. Ozone would increase demand for UST, which burns LUNA quickly as well.

Another likely scenario is that if we chose to Fund Ozone with the community pool the airdrop will likely be much larger to LUNA stakers as well. I think @dokwon & the TFL team have proven their focus is on the community and ensuring we as a community and supporter of TFL are rewarded greatly.

I’m voting No unless someone can convince me otherwise but I really don’t understand the problem with this ‘double spend’ issue,

Using community funds to bootstrap a protocol that will bring great benefits to the community and value to the system makes sense, and this double spend narrative is flawed, as it claims that doing so is inherently negative which makes little sense considering where the funds will be (out of the market).

I understand how some people have a certain vision of Terra and want to simplify the narrative (which is going forward with Col5) but the reality is that Terra was built with a system of rerouting of funds which makes a lot of sense economically.

i am voting yes

Having an insurance protocol bootstrapped and ready to go is a great proposition for both developers and users. Think of it as adding an FDIC insurance to Terra.Money. It is a huge boost that will help Terra stay top of mind across the crypto community, and add greater legitimacy to UST. I believe this is a stronger net positive for Terra, as compared to simply burning the entire community fund.

Imo it would be great to have some hints at how this ozone fund will be controlled though. 1) Who decides which protocols the oUST should cover? - Do you guys think that its ok for this fund to simply cover every protocol? 2) Will this oUST be eligible for $OZ incentives? If yes, who will control that?

Good job @madeyourook for bringing this conversation back up. 72m $LUNA is something worth discussing. 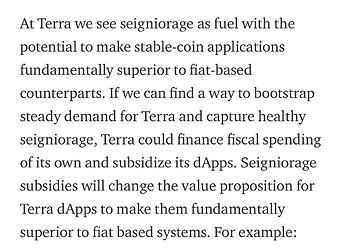 Voted yes. Do said Ozone works regardless, so now there is no need to use community funds. BURN IT ALL BURN IT ALL

Burning LUNA alone won’t increase the price of your LUNA, instead, demand for the token plays a much larger role.

Also, the 1b for bootstrapping Ozone will only be released in the event some catastrophic event happens, and in that case you’re probably already fucked, so double-burning of tokens is hardly an issue here.

Voted no, though it might already be too late because we are already reaching the voting quorum…

Burning this much money that is NOT in circulating is perhaps the worst possible use case. Seriously… over $1billion designated to help build the ecosystem and the idea is to burn it???

What if we used the community pool to boostrap Ozone,
Then burn it once the reserve natively collected from Ozone goes above community_pool_amount?