UST at $1.01 and trending up. Is new UST not being minted fast enough?

CMC now shows UST at $1.01, with a now-month-long uptrend (see the screenshot below). While deviating from the peg upwards is fantastic and proves demand, the premium now required to purchase UST may slow down further growth.

A 1% difference over the target value is peanuts for crypto degens, but a professional institution might be reluctant to use an asset whose value is expected to imminently drop by a full 1%.

If it was on a scale of hours or days, that would be okay - but the trend has lasted now for a month. How can new UST be minted faster to better keep up with demand? 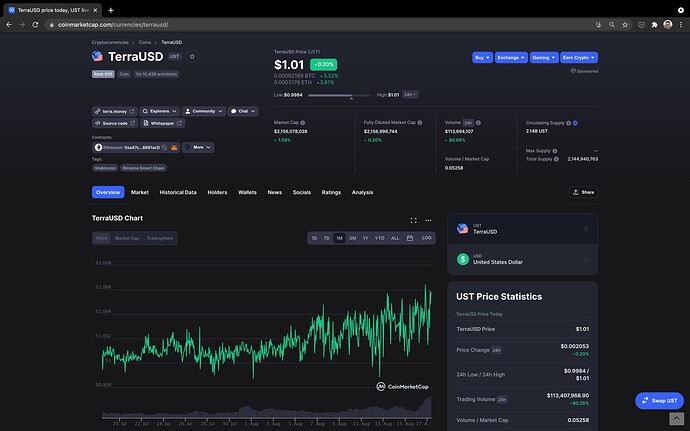 There’s a limit at how much minting is done per day (on either side, Stablecoin or LUNA) to avoid sudden movements driven by arbitrage seeking whales, at least that’s my understanding of it. It’s part of what kept UST under peg during the last flash crash, and I do believe the limit was increased after that but still we may be seeing so much adoption that we’re hitting said limit.

Forgot to mention, there’s a project coming that will help us common folk make money and help the system keep the peg White Whale. The limit is only for automated minting by the network, we as users can sell our UST (by minting Luna) and buy back lower to profit from arbitrage.

I think earlier this year when UST first exploded we also hit bottlenecks. I thought the limit had been removed? I could be wrong.

According to this twitter thread the redemption capacity back then from UST to Luna was $20m. IIRC it was raised to $100m. Not sure if it’s the same or different when going from Luna to UST.

@dokwon’s target for 2021 is 10 billion UST; if demand continues to rise, it will do so exponentially rather than linearly. As such, perhaps the pace of UST minting should be increased?

White Whale is a cool idea, hope it’s ready not too long from now!

I believe Columbus-5 will increase UST minting up to 200 million a day! That’s what I’ve heard. UST demand is sky rocketing so Columbus-5 will
Help out a lot!

Interesting - can you point to a source?

At least I can’t see this mentioned here or here.