Disclaimer - I am employed by OpenOcean

OpenOcean is the first CEX and DEX aggregator partner that has deployed on Terra. With the integration, users can now trade maximum returns on Terra-based assets executed by OpenOcean Atlantic, our second version, which provides an algorithm optimized for maximum returns that cannot be found anywhere else.

The algorithm optimizes trading for the best returns based on multiple parameters, including better price, lower gas fee, lower slippage, and optimized routing to maximize final returns. This means that you do not need to worry about the tradeoff between the best price from using multiple routes and the higher gas fees that may come with it — OpenOcean considers everything and offers you the best solution to get you the most out of each swap.

OpenOcean launched in September 2020 and has been sailing smoothly for over a year. Since launch, much progress has been made; the protocol went live, 14 networks and 70+ liquidity sources have been aggregated, and 400K+ individual active addresses are trading on the platform. Since OpenOcean’s inception, the protocol has provided tremendous value for traders, saving millions of dollars at no additional cost.

On January 10, 2022, OpenOcean announced the aggregation of Terra and its leading DEXes Astroport, Terraswap and Loop Finance. 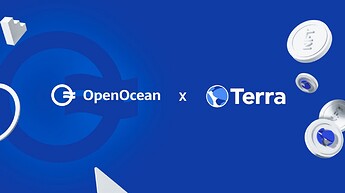 We would like to propose a trading competition on OpenOcean in partnership with Terra and leading Terra projects. The campaign will look similar to what we did on other networks e.g. Fantom

The Fantom campaign kick-started trading on Fantom via OpenOcean, brought new users to the network, helped existing Fantom users trade maximum returns, and increased trading volume significantly which has continued to increase resulting in new campaigns and Farms on leading Fantom DEXes. We would like to replicate this success on Terra!

This will allow our 400,000 active user base to be introduced to the Terra ecosystem and Terra-based assets - increasing awareness and bringing on more users to Terra.

For this, we would like to ask the Terra community for 20kUSD worth of LUNA to allocate for campaign rewards.

Campaign details (To be confirmed)

You must have a total trading volume exceeding $500 USDT equivalent on Terra through OpenOcean.

Following tokens will be counted into the campaign volume: $LUNA, $UST and much more TBA

The rewards will be distributed based on rank of trading volume. See example below for $70k reward pool: 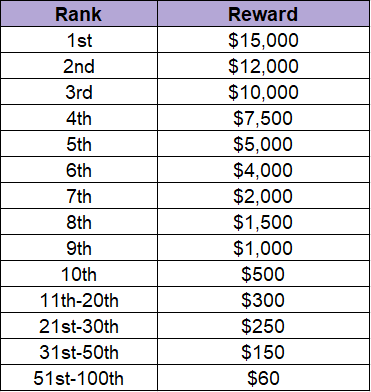 Please allow for open discourse and feedback in the comments below.

This is awesome! Keep BUIDLing guys!

As someone who has used OpenOcean and participated in the ongoing event “Terra Raffle Trade” I would like to say that the proposal will bring benefits to both parties.

This is really awesome from OpenOcean. I remember participating in the Fantom trading campaign. Hope this will sail too.

Question: will the rewards be paid in native tokens? Or in stable coins?

Open Ocean is fantastic, the highest trading efficiency across 14 blockchain networks
I participated in the avalanche network trading campaign. I hope to win this too💪

A Terra trading campaign on OpenOcean will be amazing!
Dreamed about it since

People will trade, get best returns and still get rewarded

OpenOcean algorithm is superior that is why trading returns are maximized at many levels.

Yes very unique technology and features. That is how we like to see projects in this space, doing better stuff than the existing ones.

What also fascinates me is how they care about the community. There is always someone to take care of you no matter the time or the day.

Yes they must be a very structured and professional team

OpenOcean is unarguably the best aggregator in the space with the smartest intelligent routing algorithm, talking from experience as I have traded many times on their website and I always get the best swap rates. All the previous trading campaigns they’ve run previously were a success and they always distribute rewards as promised.

This would be a win-win collaboration with Terra, as users from Terra would enjoy the best swap rates and still get the opportunity to win awesome prizes. I say let’s do this for sure

I agree with you.
it’s the ideal collaboration " Sharing user for mutual benefit "

What value would this bring to terra users? Also I see you don’t charge any protocol fee, how do you get revenue?

I see you have a governance token, when will your dao be released