Summary
The intention of this proposal is to stop scam proposals

Motivation
In recent times, we saw a rise in scam proposals, where the scammer uses external links to try to collect info from the victims. The biggest problem in my view is the ability to introduce external links on the text box of the governance text proposal.

we propose to cut the ability to introduce external links on the text box of the proposal, the only external link allowed should be the agora forum discussion (Governance & Proposals - Terra Research Forum…).

YES this is the way forward.

Thanks @Vegas for this security awareness. However,
i am afraid that github scam hyperlinks would not be filtered/deterred.

In this respect, i would suggest to appoint an administrator (if possible) to screen the proposal prior to opening for vote, in addition to increasing proposal fees to 5M Lunc or higher.

Thanks as always for looking after the community.
@vegas, a living legend.

Also scammers should not get their deposit back. once the proposals marked as scam.

Scanners’ wallets ought to be blacklisted and their coins should be burnt or something along this line.

They are just bad for our reputation.

I understand that a means of increasing the deposit is already being done, in my view that will help, but still the scammer will be allowed to post the link, so in the reality is not going to stop any scammer to post a link in the text box, that is the reason that I’m proposing this. proposal 7101

I think it’s a very well thought out solution.

I understand that a means of increasing the deposit is already being done, in my view that will help, but still the scammer will be allowed to post the link, so in the reality is not going to stop any scammer to post a link in the text box, that is the reason that I’m proposing this. proposal 7101

I support this proposal!

Please can we blacklist their wallet and burn their proposal coin just as someone here suggested that will give a thorough cleansings of scam proposals!

increasing the deposit up to 5 m

Thanks for introducing the discussion and signaling proposal. I recently worked up a pull request along these lines that introduces a warning prior to navigating to any non-Terra link (Add modal popup for external (non-Terra) links contained in governance proposal descriptions by esoderquist · Pull Request #121 · terra-money/station · GitHub). See attached screenshot of what this could look like in practice. The UX appears every time a link is clicked, unless the link explicitly points to a whitelisted location (currently only *.terra.money) 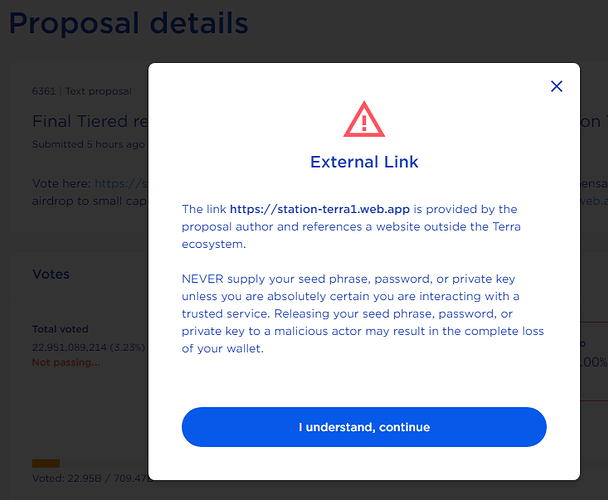 I absolutely support moving something forward to combat scam links, but am torn as to whether stronger management of links would be effective or just push the issues elsewhere. My fear is that allowing agora links only will lead to a cat-and-mouse game where the scam threads move to agora, hence the approach of balancing governance with mechanisms for user awareness.

While the intent of proposal 6082 had a noble goal of helping prevent malicious spam, and while the documentation does state that “To prevent unnecessary proposals or abuse of the system, all governance proposals must obtain [the] minimum deposit…” , a case study of the Terra v2 system shows raising the cost of proposals at this point will not actually accomplish anything other than hurting legitimate governance by raising financial barriers to those wishing to rightfully take part in governance through raising legitimate proposals. What raising the price of proposals will do, at least at this point and time so soon after governance has been fully restored, is to put up a financial barrier to proposals at a time when we both fought hard to have it restored on one hand, and is needed on the other hand.

Raising the price in this particular situation, such as proposal 6082 did, will not actually stop these particular scammers at this point (they obviously have become very lucrative at what they are doing). We can see this on the Terra v2 chain, which is having the same issues (although less frequently in the voting section), even though it costs ~$1,254 to put in a proposal on that chain. Since 6082 has gone live, there have been 3 more scam proposals on Terra v1, in the voting section, over the past 2 days. For this(these) particular lucrative scammer(s) it is a cost of doing scamming business - a form of marketing for their hook. They are willing to lose upto 5x more in Terra v2 (actually 12x more than the cost prior to 6082).

Although it is true that raising the price is intended to “To prevent unnecessary proposals or abuse of the system”, you must ask, since we already have a case-study in Terra v2, and have already raised the price in 6/2022 (and the price of LUNA v1 has raised 5x since then), if there is not also a way to actually address the core of this particular problem without raising the costs such that it hinders legitimate governance while the scammer is still doing business as usual.

I would rather see things err on the side of governance (which will happen less as the price of proposals raise), and so I would rather see a solution that more directly focuses on the core of the problem without discouraging proposals by raising financial barriers (to the degree that is possible). I think that is what the proposal Vegas has put in is attempting to do. I also think that the concept behind the solution esoderq’s mentioned would also be very helpful.

This does not even touch on the fact that as LUNA v1’s price changes, particularly where it increases, can quickly put the ability to participate in governance through legitimate proposals completely out of reach of most people (and I know that as of now, the most recent increase will curtail my own participation - or at least make it a lot more difficult).

Personally, I hope that there will be a future proposal to reduce the cost of proposals back to the pre-6082 level, along with a delivered solution, such as the one proposed (7101) in this proposal discussion, that attempts to more directly meet this issue (where possible). That does not mean that, as the documentation states, that raising the price is not a discouragement, just that in this particular situation it will harm legitimate governance to a greater degree than the discouragement it would be for scammers - at least given the case study of Terra v2.

At the same time, I also can appreciate your position and thoughtful response as well.

I hope you are having a great day today

You’re absolutly right. I agree.
But I think it’s reasonable to pay at least 10m LUNC for propsals.

Would this just result in scam links being included here at agora?

I guess there are controls for agora that could be helpful in filtering out as needed, and less people will actually read the agora posts so less exposure to scam links.

yes, and you have the support of the community that will flag as scam on the comments.

I saw your PR (adjusted to proposal 7101) to station repository was merged.

I just wanted to say Thank You

Thank you too Vegas

Thank you as well to each person who took time to vote, and for those who voted for proposal 7101