Serious question: How does anyone feel comfortable going forward without bringing the attackers to justice first?

Five months ago, when Mirror Protocol came under attack, I pointed out if the attackers were not identified and dealt with, they would come back and launch more attacks, which just happened.

And I point out the same thing again, that if the attackers, who had to pass Binance’s highest level of KYC verification to launch a part of their attack from Binance, are not identified and dealt with, they will come back again.

Can anyone in Terra give any security assurances regarding future attacks and why the attackers are not being pursued with at least a pressure campaign on Binance, who allowed the attackers to violate their Terms of Service while taking no action?

A series of fraudulent polls have recently been launched against Mirror Protocol in an effort to steal tens of millions of dollars and bring it down. Terra Network needs to investigate these scammers before they launch more attacks on other... 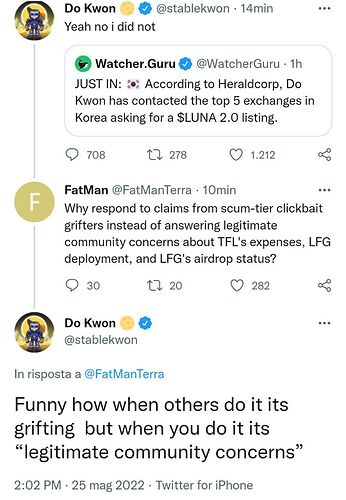 Finally the fat dumbass got roasted

Good one Kwon, you just gained a little more respect from me

Fiatman Intelligence Operation is still going eh? The guy who stanned for fiat then claimed it was more stable than UST because the collateral that backed it was “demand.” Best line ever.

Fiatman is CIA. He already contracted himself. “I don’t need lawyers because I speak the truth. D’oh! I used the wrong legal term.”

How did he know he used the wrong legal term without lawyers? Is he one himself? @FatManTerra
I have the luxury of emotionally speedposting on Twitter because I'm speaking my mind & thus the truth. You need lawyers to vet your tweets and when given agency, you lie and lie again. We are not the same.

He's not very good at this, is he? Even SBF's deflection was better. The entire thread detailed blockchain analytics from 2021 and before, not 2022. Say there was no Jump bailout monthly bribe. Say you and Jump didn't manipulate Mirror governance. Say it. pic.twitter.com/pBagitZ5U8

@FatManTerra
Minor addendum: I used the wrong legal term here (d'oh) - the correct term for the most likely type of action being filed is 'mass arbitration', although class actions are also being considered.
Poop May 25, 2022, 2:38pm #6

I’m sick and tired of @FatMan

get off your soapbox you conspiracy theory obsessed fat asshole

This fatman must have lost some money in UST and now he is on a witch-hunt in the name of community. He is very deceptive to say the least…