Burn not possible or not in the plans by Do Kwon . 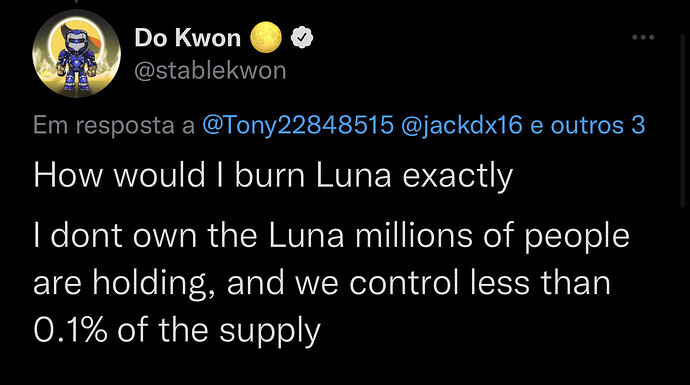 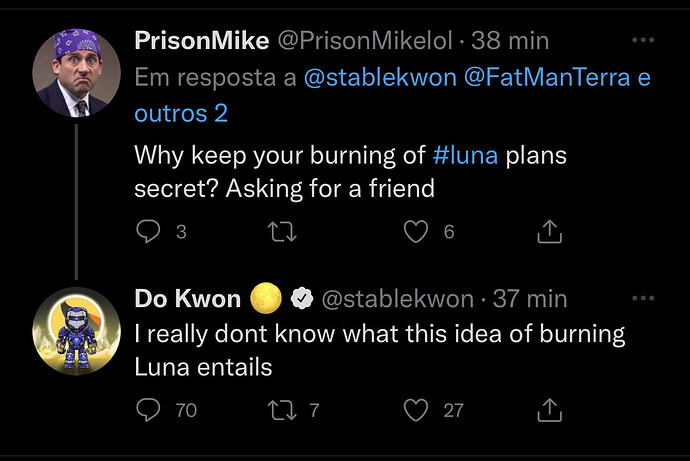 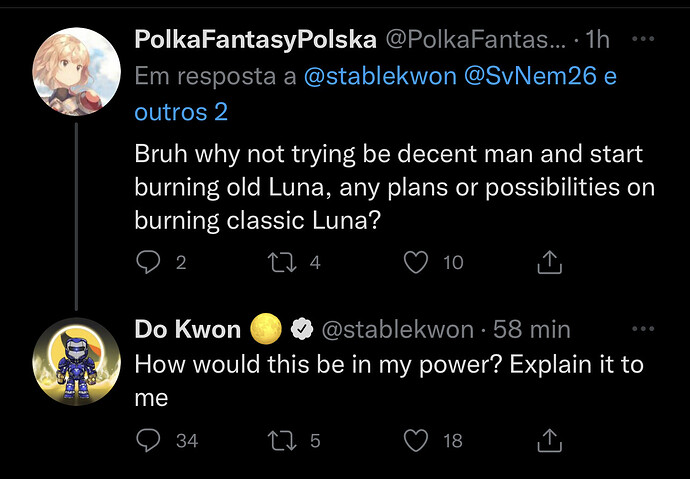 Literally none of these idiots mentioned it would be incorporated into transactions as a fee to the burn wallet. Of course he responds to the retards.

I get it but why not distribute in a proper manner.
The final one does not cover people who bought during 8 to 13 I belive.

Now two group of people getting compensated who bought before 7th May and who bought after supply turns to trillions.

But what about people during his tweets

His tweet seems encouraging and then people who bought believing that got rekt.

We should not compete against the current supply of 6.9Trillion supply.

Snapshot should be done at the last halt.

Its not fair to us.

Whoever says that crypto is risky and invest what you can afford to lose. OK I get your point then don’t distribute anything at all that way everyone could be equal.

IF you want to distribute distribute in a fair way and keep everyone in mind.

People who bought during that time because someone sold and there were no warning.

If someone getting compensated for what they sold then why he is doing unfair to us.

During the attack most people sold and encouraged everyone to do shorts in future and talking about how they made much more huge profit just by shorting.

They are getting paid but we are not.

That is so unfair.

why u so salty about it? u seem kinda obsessed with vultures? everywhere u post about it. why u so concerned that other people want to make money? are u some kind of a saint?
everyone is taking a risk here. even with a burn, nothing guarantees luna v1/v2 will succeed! I would actually bet the opposite at this point. Do Kwon lost the trust of everyone and he knows it, that’s why u have a vesting period. grow up dude.

OH YES, IT IS POSSIBLE WITH A PROPER INITIATIVE TO BURN!

The burn mechanisms are fine. However, what is the initiative to burn?
I am proposing a locking mechanism where people can lock their Luna coins. The locking mechanism comes with a fee. One percent of the fee is burned, other percent is shared with a community of people who also locked their coins. When locked, you get a number of coins that are pegged to Luna, and that you can exchange back to Luna (unlock) whenever you want. You can NEVER get more coins the next time you lock Luna. This way, you are deflating luna, burning luna, and pegging it to a coin whose price is constantly rising in respect to luna. Also you are EARNING Luna too!

Read more about it here and how it is done:
reddit DOT com/r/terraluna/comments/usu7v0/here_is_a_luna_solution_that_nobody_has_considered/

and here is the proof of a concept built on Ethereum, with a white-paper:
github DOT com/olejardamir/Hertz

Mechanism WORKS, and is a valid solution to a current problem. It goes along any burning mechanism that you propose, and it gives people a reason to purchase and burn Luna!

Let us know how your Luna2 allocation goes. You may be surprised when you see the number you get…

I think all the tweets by do_kwon where he says he can’t burn tokens because people own them are hilarious.

What does he think he is doing by taking a snapshot in the past and redistributing value based on that snapshot….

(its nice that you can’t ‘@‘ the founder And CEO of this platform. If he is afraid of what people have to say about his actions then he shouldn’t be turning his platform into a p_o_n_z_i scheme. Actually it looks like we aren’t even supposed to type his name, what a joke.)

He must probably is Do Kwon’s escort.

I think Tiago_Bimmer is Do K won’s burner account lol.

It’s possible to put pressure on VCs to share their obscene profits and help restore confidence, as well as their tarnished reputation.

Let’s get VCs attention and hold them accountable. Sharing some of the obscene profits they’ve made in Luna is they least they could do to help restore faith in the ecosystem. While retail investors lost their life savings and as dozens decided to tragically end their lives, they profited handsomely, laughing all the way to the bank

They aggressively sold Luna precipitating a run on the bank after previously promoting it to retail investors. Get them to feel the pressure. They have a soc…

Mint new Luna to burn Luna Classic. And that’s what you did in the first place, right? That’s your style man…

Just kidding, but it is possible to put taxation. Even though cex won’t like that idea they may still implement it especially binance. Because CZ said that he will do anything to help. Just ask for it, communicate for God’s sake. Also you can implement tax for stake rewards too. Dont say impossible without thinking. And one more thing, even if you put tax only in dex, you will still acquire too much money. For example, there is tax in dex for Floki Inu. They’re spending this tax income for marketing, just check their marketing wallets, you will notice how big it is. They spend to much money from that tax income to make deals with popular football clubs.
So don’t say to me it is impossible. Just think and communicate. I appreciate your tweets today because you got in touch with community to some point at least.

It’s should have been OK if he would distribute in a fair way.

Why would we get something out of 6.9T supply when we actaullay bought at high price when there was less supply.

Your very excited about the Pennies on the dollar DK is giving you with V2. You should stfu and let others work on a plan to bring back Luna Classic. Everyone doesn’t have such low standards for compensation as you.