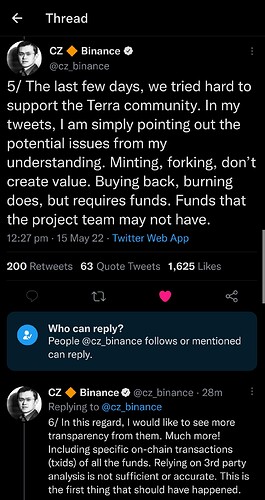 Either buy back or find another solution

Agree not to folk due to no trust left.

But Fatman proposal and buy back, burning will do.

Luna team should move forward without Do Kwon.

Gather money. Borrow wherever they can. Use the BTC to buy back LUNA. BURN BURN BURN.

I think Fork is a good way out. Ethereum did it. It turned out well. It is also show that money is money because people who use it take it as it is. It is also the thing only crypto can do.

CEX will hate it. They may have to reimburse people on their exchange from their own pocket, because which CEX actually put your coin into your wallet? Don’t forget that the UST dump happened on their platform. All the gonna do is take in the fee and blame Terra despite the dump happened on their platform. Not to mention UST relies on arbitrage trade to maintain peg but they halt withdraw and interrupt the arbitrage.

Burn is the way

[Proposal] BURN and REMEDY fee with each LUNA transaction

Based on our volume which is around 3B $ (last 24h) at the moment if we implemented only 3% burn tax on each buy and sell transaction we could burn around 300,000,000,000 LUNA at the time of writing this proposal (I took price of 0.0003). This burn tax could be a measure put in place until the supply is low enough for us. What More

CEX normally wont reimburse. If Binance would do it. Its because CZ is a good guy. Its not his mess to sort out.

Its Luna. They created a system with flaws. Do Kwon was too arrogant to even listen about the flaws. Calling the guy stupid. He challenged the billionaires in his twitter following to do what that guy mentioned. And we see the results now. The billionaires crushed Luna, and we went down with them.

And then Luna team came with the idea to do hyperinflation?!!! How brilliant is that?!

I don’t think Do Kwon should go @Gio1.

He certainly has his faults, perhaps his greatest is an unwillingness to listen to others, always believing he knows best. But he has to learn from this, and I feel that, with his back aginst the wall, he has to turn things around or live with this failure forever.

His first child is called Luna and I know as a father that he couldn’t bear to burden her with something associated with failure.

Maybe I’m delusional, or stupid, but I think that Luna will rise again only because Do cannot live with himself any other way …

Do Kwon was behind another failed stablecoin called Basis Cash.

He did NOT learn anything from that. How many people suffered losses from that one?

Now he did it again! He did Stanford University. This is his learning curve? His behaviour is childish for calling people stupid and poor. He shouldnt be a CEO.

People ended their lives because of his learning curve.

Binance wont reimburse
Why would they ?
They need to pay billion to reimburse
This wont happen

I am about to cry seriously?

Dude just wake up
What u are saying is so stupid

Yes thats what I meant. Its not CZs mess. If he would repay some traders. Its because he is a good guy.

It is pretty obvious they got no BTC reserve left, they still have like 2 million avax, they don’t want to announce it officially, because they are afraid of market reaction and legal consequences. CZ is pushing them to tell the truth.

How can Luna build trust if they aint transparant. It doesnt really matter if aluna goes another -99% at this point. So what market reaction?

Those who bought all the fall to the last, plugging holes in a sinking ship, spending considerable money on this, deserve more respect than the rats who escaped from it, gnaw new holes and take grain from the hold with them.
Would they rather take the rats on board again?

It might even be fair for the robot to buy coins at this low price from weak hands and speculators.
That would be a healthy rise for the coin. But very long. There is no time for this.

I love how CZ is all about communication and transparency but limits the replies to his tweets. Double standard guy

do not report this idiot otherwise thread will be blocked for 4 hours.

What a childish behaviour from the side of @terra team. Admin should unlock all threads blocked by this guy. This is censorship xD

So there are no mods or other team members here right now? This whole thing is starting to become a joke

If they aren’t behind it, they sure are enabling it. Sad.