On September 20, 2022, Alex Forshaw initiated a conversation over Twitter Messenger with Do Kwon on a wide range of issues relevant to the Terra Classic community. (Kwon and Forshaw had no prior contact; the conversation was possible only because Kwon and Forshaw followed each other on Twitter, and could thus exchange Twitter direct messages, starting around that time.) Forshaw raised the question of how known and unknown off-chain Terra Classic community assets, starting with the Luna Foundation Guard (LFG), could be utilized in a way that better benefited the LUNC community. Kwon expressed skepticism that the present course of LFG asset disposition could be altered in any way. Kwon added, “[I] think the work you guys are doing is amazing for the community and hope you guys continue to fight the good fight.”

Over the following weeks, amid other conversations, Kwon expressed unconditional support for the LUNC community’s efforts several more times, without ever exploring a quid pro quo or any other form of compensation for himself, TFL, or any other Kwon-related party. For example, on Oct. 13th, Kwon said, “Saw some chatter recently about wanting to move off TFL infrastructure. Let us know if and when you want to shut it down. Also happy to keep going. Happy to do whatever’s best.” Forshaw said he felt that it would be best if TFL paid for infrastructure in the near term, and opined that the community had a time window of several months to get its act together, pay devs on a predictable basis, and find a way to turn LUNC’s user momentum into something more durable.

On October 19th, Kwon notified Forshaw of the existence of several community MultiSig wallets holding assets that rightfully belonged to the Terra Classic community, which were clearly not part of the Luna Foundation Guard or TFL. Kwon said that if the Terra Classic community passed a proposal to a) claim those wallets’ assets for dev funding, b) nominate a new slate of MultiSig owners chosen on the basis of prior proof-of-technical-work in reviving LUNC & and mutual respect, and c) show how the funds would be used to fund LUNC developers working on the LUNC community’s behalf, Kwon believed the current signers of those wallets would be willing to act according to the community’s wishes and transfer the Multisig’s ownership to the new slate of Terra Classic Community nominees.

Forshaw began speaking with Zonny (@ItsAlwaysZonny), who represented the prior MultiSig owners, and began drafting up terms.

After looking up the wallets and finding assurance that the assets were legally untainted, Forshaw consulted Ed Kim about the idea, suggesting that Ed nominate four other dev/quants whom Ed thought best, so that the Terra Classic devquant leadership could be commercially incentivized to work together as a team, build positive team momentum, and be able to hire meaningful outside help where needed. Ed agreed and suggested Andersen, Forshaw, Bryan, and either Marventus or, if Marventus declined, StrathCole. Forshaw readily agreed, and next compared notes with Max Bryan, whose list was the same; then with Andersen, whose list was also the same, but did not suggest StrathCole as an alternate. Andersen added that he felt no more than 2 members should be current Terra Rebels members, so that Terra Rebels did not control the MultiSig. Forshaw strongly agreed. Marventus ultimately declined the offer, citing exhaustion with Terra Classic politics. StrathCole thus inherited Marventus’s place in the lineup.

Do Kwon, when asked for his opinion of an early draft of the proposal, replied, “No objections; just trying to be helpful. You’ll have to talk to them [the 6 current Signers], it’s out of my hands.” Kwon played no role in subsequent re-drafts of the original proposal.

As the members of the slate had reviewed the document and came to mutual agreement on all items, the drafts were also shared with @ItsAlwaysZonny, who spoke on behalf of the current MultiSig owners. Zonny only suggested that the tokens be held for yield instead of liquidated (i.e., stake the tokens for rewards) as the liquidation impact would be significant, there was no reason to liquidate a large percentage of the holdings immediately, and the tokens possessed significant strategic value and yield potential.

Members of the MultiSig were mutually selected based on several key criteria:

YES - Delegate control of ~$4.15M of community-owned Ethereum assets to an expanded 9-person MultiSig committee of Kim, Andersen, Forshaw, Bryan, StrathCole, Etienne, Ian, Coach Bruce, and Jack Zampolin to manage on behalf of the Terra Classic Community. This shows that the LUNC Community accepts a need for the existing core dev/quant team to be paid for their work, and trusts their judgment to delegate work to other devs and community members who submit credible Proposals to create additional proof of work for the LUNC Community. Extract and burn all USTC as it becomes available in the Fuse and Aave lending pools.

NO - Reject the proposed multisig ownership transfer to the new ownership slate. This shows that the LUNC Community does not trust the proposed slate of 9 to manage community funds.

Note: This proposal would be separate from, and concurrent with, Edward Kim’s grant program (proposal 8813), in which Kim would oversee grants across a wider range of potential initiatives, including specific dApp development teams.

Thanks and is necessary step.

You made my weekend…many thanks. My full support.

My only concern is with Coach Bruce, He needs to be professional and calm since I am following him on twitter for a while. He makes some moonboys claims frequently. He is a huge part of LUNC as he hold a big chunk of voting power but that hold a huge responsibility of how the community should look like to others in regards to professionalism.

I hope that LUNC DAO takes into consideration that so many people hopes rely on this recovery.

Best of luck to all.

No on this one. If it is community funds, it should be transferred to the community. It can go through the same process as other proposals that need funding.

Not in favor of giving $4mm to 9 people without a proposal of what the money is going to be used for, no matter who the proposed 9 are.

Great proposal, great team that is going to control this funds, wouldnt change anything. Please dont add any moonboy lambo to this team.

So Do Kwon has hidden MultiSig wallets. Thanks for the information. Interpol…

I generally agree with the proposal.
I prefer six “yes” votes to authorize anything. We need a broad consensus because the responsibility is huge and the amount the funds you all will manage too.
In the point number ten why can not the funds be taken from the Multisig?

Thanks for all your hard work!

We desperately need the money and I can’t think of better people watching over it!

Could I please ask.

Who out of the 9 members listed were or were not previous employees, contractors or beneficiaries in any way to TFL prior to and following May of this year?

If they were any of the above, in what capacity did each contribute to TFL?

What are the names of the 9 members listed and a method of contact?

How will governance, reports and insights into this activity be reported to the community for oversight?

If we are truly a decentralised entity, these details should be a minimum pre-curser to any governance proposal. Especially one that provides regular payments or large irregular payments from community funds. Be them realised or not.

Accountability and transparency are the keys to the success of this community from here on in.

There are a few on-chain and project wallets that Mr Zon was signatory for. I know one was used for a large burn early on. Thank you Mr Zon! Could any of the other wallets be utilised for the good of the community?

I would love to see Vegas in this council.

With all respect,I dont agree with this proposal ,it goes against the idea of decentralised blockchain. Instead I propose for that founds to be swapped for lunc and then sent to the community pool(this way is in no hands control,expect the community). And than we can use the mechanism that is already in place,apply for a grant on the governace system. 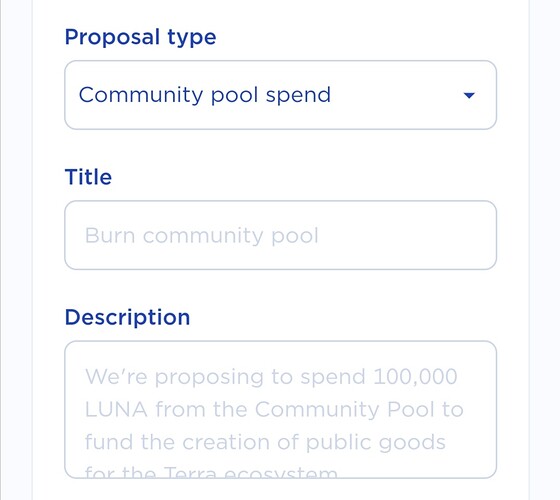 The longer I consider this, the more confused I get. Wouldn’t the obvious solution be to use the Ethereum assets to buy LUNC on the open market and send it to the community pool? This adds buy pressure to LUNC and allows project proposals to adhere to the tried and tested on-chain governance vote method.

The decision to specifically cordon off $4m into the hands of a centralized committee seems irrational until you look at the salaries involved. $60k/year per signer - $540k/year drained from the pool (over 10% of available assets). If the funds were sent to the community pool for standard on-chain governance voting, the people involved in creating this proposal would not be getting these massive full-time salaries for relatively little work.

Even if you overlook the obvious cash grab nature of the proposal, there’s still so much bloat, with three people on the multisig who have barely contributed, at least to my knowledge. People like LUNC DAO and Ed somewhat make sense, but who is Max B? StrathCole? The drain is absolutely massive and it doesn’t need to be.

It’s a pretty well-executed cash grab on Alex’s part and I respect the hustle, but it’s hard not to call it out for what it is.