Yes this is my hope as well. I detailed in my plan, how important USTC is to LUNC and adds a lot of value that if unlocked could help restore both chains once again.

My plan will be up for vote hopefully by Sunday.

If I could vote sounds like a double No from me. But guess that’s obvious due to my plan lol.

The guards here, I mean moderators, are laughing at the cockroaches. [That’s what they call us.]

*Any new classic holder post halt can NOT vote! Repeat can NOT vote. POS modules and governance are tied together. Solo votes do NOT count. Even when you get a success modal. They know this and have ack this many times.

Current classic stake holders DO NOT want to interrupt their 700,000% staking rewards

Here was a test a few weeks ago:

[Proposal] BURN and REMEDY fee with each LUNA transaction

I hate to say it but you are wasting energy. Better to silently boycott v2, and push your CEXs for a burn. This is the way. GL

IMO, the “defense” of a governance attack was a cover story. The real issue was/is that the Cosmos SDK governance module is flawed in emergency situations.

The Terra team has no way to implement emergency governance. Plenty of archived threads show this chaos.

During an emergency, not only did they have to wait a full 7 days for a proper vote, assuming passage, but also another 7 days for the fix to roll-out. In an emergency a total of 14 f’n days while billions were bleeding! Had they halted the chain right away, they probably could have saved the entire system.

To fix this delegation time issue, they bypassed governance by going with halt and a code fork, chain V2. Using “governance attack” as a convenient cover, but the real flaw was the governance module.

It’s all in the threads. Draw your own conclusions.

also, how did your vote get whitelist, all other proposals ( legitimat and founded) couldn’t
?

there is dev who can appove it, you can make pull request on github.

I don’t think it is whitelisted yet, still have to click “show all” to see your proposals

That is great, that list will help for sure.

I know Joe, the current station app is crappy, this needs to be changed. It is not really trustworthy. However, we are not wasting time though, we are pointing out what really matter, no matter the voting works or not. People can see what is falling aparts. We used their voting system and none even vote in their favors you could see in the screenshots, and we see too many votes counts are not counted too… And App is down for some people to see.

The whole ecosystem is mess… Even when app is running, we have to wait for dev to whitelist lol… We are still stuck centralization approach.

If the dev and TFL really care, they must make application running smoothly, make sure the voting is transparent. If I were them, I would try to get more trust from community, that is what platform have to bridge for. Instead of trust bridge, the mod are acting crazy and dev are making huge bugs over one another, and founder is on run… I sometime pity for them. They better get together and gain the trust from community.

this vote is useless. we need to enable staking first so lunc votes are able to stake and vote. the current voters are huge supporters of luna v2

I’m afraid they’ve broken code-is-law on so many levels. They’re breaking the law holding the network hostage. At this point we can assume all Validators against returning governance on this network as malicious attackers and should pursue them in court.

Only when the keys returned can we restore Classic.

this vote is useless. we need to enable staking first so lunc votes are able to stake and vote. the current voters are huge supporters of luna v2

If you read the voting correctly, your choice is there as well. You can simply vote YES at round 1 if you want to go back to under the same Do Kown and his team. 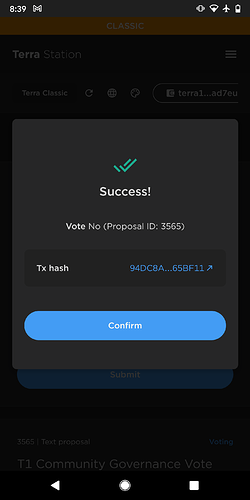 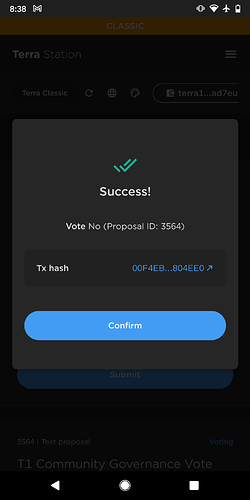 If you read the voting correctly, your choice is there as well. You can simply vote YES at round 1 if you want to go back to under the same Do Kown and his team.

do you understand how it works? how do i vote if i can’t stake?

So, the first important thing is !!! Enable stake !!

why don’t we just chase them to re enable staking instead of chasing them for every vote?

You don’t understand. We attempted this already. Look at Github, and you will see proposal 1385 was ahead of yours. “Enable delegation during staking halts”. This was before V2, and on the front page. “Whitelisted.” We had hundreds of supporters. You are like a new crew discovering what we already attempted. This is looper logic here.

Honestly, don’t feel anything will happen until a few 3rd parties with power and jurisdiction make their moves. Wait and see now. Take time and read the posts and all the comments.

Voting at this time is more important than ever. Received this message when attempting to appoint a delegate. Windows OS, Desktop Terra. Note: Redacted my holdings from image. [Error-Message-Terra] Vote on the solution!

The governance is broken, the dev worried about new attack, we are mainly concerned about termination of T1 after sometime.

If you are worried about an attack, will it be closed all the time?

I mentioned repeately why they couldnt open delegation, “they got no solution for the broken goverance”. they worried a few whales to takeover, you were concerned why your previous proposals vote didnt go through. I know the feeling, it is the Station dev holding decision. You have to talk to them in the Github, but like i said, they will hold on, if you read in Github open case, Dev from Station already mentioned it. They have no timeframe to open.

Hi, I'm new to Terra ecosystem, so maybe I did something wrong. The goal is t…o bake some Lunas. In Terra Station Web I'm clicking -> 'Stake' -> 'stake.systems' -> `Delegate` -> In `Ammount` file I provided 1000. Then the error appears: ```javascript failed to execute message; message index: 0: message type *types.MsgDelegate is not supported at height 7621088: message not supported: invalid request ``` Not sure if the issue is related to the ecosystem or to the app. `7621088` sounds like block height, so maybe it's related to the halt.

I am not worrying about how the voting getting through. I am worry about the governace. Thats why i am asking here to come up with new governace to prevent all concerns. We really need new design of governance.

Coz of alll the mess, they really want to Terminate T1 soon. That concerns me most, the termination of T1 means your investment is gone, people will loss another saving and their life. You think your T2 airdrop is fair shares?

if all people demand for governance restoration, TFL may come back and tell people that we will make you happy to open delegation, and later they could start T1 as testing ground.

Now you see those will be disaster, it will give them permission to shoot T1 completely.