Please split based on zero (like 7 part) this %10 category.

Dude everyone had the possibilities to buy at the bottom. So what you are saying is also unfair because you dont even know how much they invested at 0.00001. Maybe it was only 50$ because they thought why not… but I dont believe people put there more then 500$ or sth because everyone had the fear to lose everything again… so stop argue about this bullshit. You can still buy for low at the moment too.

If you are going with Fork then do it in a proper manner!

People bought it because of your tweets!

Now make everyone equal and distribute according to the supply at that price point.

If someone bought at 40$ and supply was 400M then they should be getting accorindg to that circulations.

Where most of us bought when there was much less circulation in the market!

Please do not say everyone has chance to buy now as people don’t have much as you.

I myself bought during 8 to 12 thinking it is the bottom as do kwon tweeted he had recovery plan.

You’re the biggest vulture and liar I’ve ever seen

Go to Binance or others exchanges and see their order books, millions and billions bought everyday

hello guys i want to know about a topic please can anyone help me? e.g; Let’s say 4 million luna$ were bought at a low price after the attack, how to calculate 10% of this and how many luna$ will be in my bag in the new system

I totally agree with that, how many people knew there would be 6.5 TRILLIONS coins when the coin started to dip? No info anywhere, no warning on exchanges . Only way after, when price was considerably lower people knew and exchanges displayed warnings. There should be a proportional compensation if you bought at $15, $1 or $0.0000001.

It only makes sense. Maybe people invested a lot at the bottom like I read here, fine for them but they invested on a basis of a much larger supply. The reward (if there is one) should be proportional to the relative supply at the buying time, otherwise it makes no sense.

The tweet also said that UST is out of 1 dollar, don’t care, I have said it many times~ Now what?

Yes this especially applicable to people who bought on May 12 and 13th. Yeah the people screwed the most don’t include current buyers now because they can buy by the boatloads, but the transitory period were they were hyperinflating Luna seriously mostly late 5/12 and 5/13 when it started going from a billion to 100s of billions. They will be lumped into the 6.5 Trillion marketcap instead of their respective market caps when they purchased. This will make their stake in the Luna ~ 0. This MUST BE fixed. 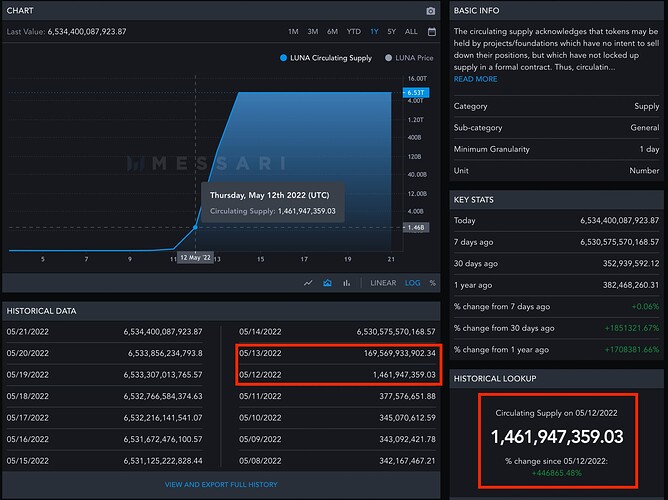 If there is ever to be a restoration of confidence in the project, then all Luna need to be treated equally whatever the relaunch plan might be. Otherwise, establishing different values to same asset dependent on when it was acquired will erode what little confidence there is in the project. It will never be possible to assign a real purchase value for each coin, so a coin purchased in Dec 2020 for $0.5 and held pre-crash can not be argued to be valued at $60 where as something purchased a few days later is worth $0.0001. Sadly, all have the same value, or more correctly lack of value. If there is demonstrated to have been fraudulent activity ahead of the crash and assets can be recovered from those responsible, then clearly any compensation would only be due to those present in the pre-crash snapshot. There needs to a way to reduce coin supply either by a massive burn or by a form of fork.

In my opinion, every unit of luna, whether u buy pre or post, should be treated the same.
There are big and small holders. There are poor investors who spent life savings and there are rich investors that can afford the losses too.

In Do Dwon plan as it is now, pre-holders are compensated kinda fairly based on a static supply whereas post incident holders are treated based on the fully diluted 6.5 trillions supply. But people bought after the incident while the supply was clearly not as huge as it is now, that the real issue, it started going south after they stopped the network. About whales, yes I agree there should be a limitation per holder. But the most important thing is to help people based on the supply they bought at.